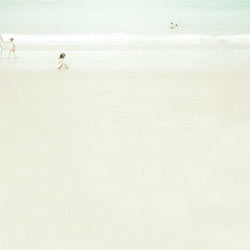 In theater design, it is often the barest suggestion of an image that suggests a particular time and place. A few bricks sketched on a dark wall, and the stage is transfigured into a dark and foreboding alley. In a similar way, Maria Luisa Morando’s photographs are so washed in light that only the barest traces are left to represent landscapes where sand and water interplay to form the shore. From her early years in theater and costume design, Morando brings an eye that is skilled in developing the essential, leaving details to be fleshed out in the mind of the viewer.

“Aqua and White” is a series of large-scale prints that, installed in the long and narrow exhibition space transform the room into an installation, beckoning the viewer to step into the image. With her cool gelato colors and sunlight reflected off the sand and celadon waves, she evokes fond memories of summer days. Because of the lack of sharp detail, it becomes impossible to explore the images for their specificity, and instead they open up and play to any seaside memory the viewer cares to pour into them. In “Camera Lucida” Roland Barthes referred to photographic details that create an intense, personal response, as the punctum. For images that are essentially punctum-free, Morando moves out of the way, allowing the viewer to find their own point of entry into the briny blur.

Having grown up in a small village in Great Britain that was, “as far from the sea as one could possibly get,” Morando’s childhood holidays created her first memories of the seaside as a place of retreat and contemplation. In the anxious and stressful days after September 11th she journeyed to the French coast at Biarritz, where she found both solace and her photographic muse in the shoreline. Like land and water’s eternal compromise that interplay and define the shore, these early works were titled with words from the Lord’s Prayer translated into Arabic, and the geography of the coast became a hopeful metaphor for the peaceful potential of East meeting West.

In the years since then, Morando’s seascapes have expanded the opportunity for a multitude of associations. By draining her photographs of color, the artist has allowed room for the viewer to fill her work with their own associations. For “Aqua & White” her point-of-view completely removes the horizon, offering only sand and sea, punctuated by the occasional blurry cipher that stands for a beachgoer or child at play. The square picture plane, like a Tibetan Mandala, offers the viewer a point of focus and contemplation.