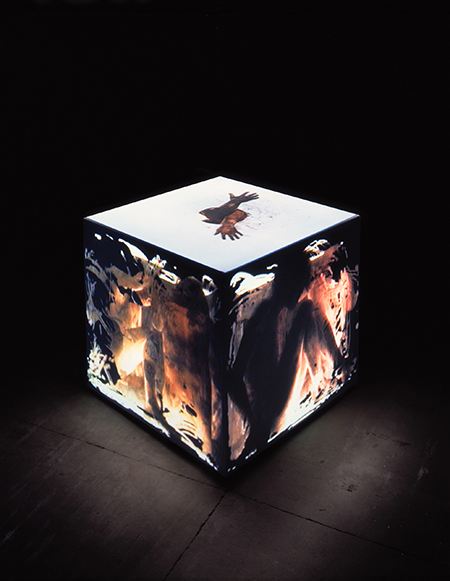 Paul and Peter Sarkisian, father and son, make a formidable artistic team, as this exhibition demonstrates. Yet it takes concentrated looking to reveal the synergy between their respective bodies of work. Further, how this multifaceted exhibition came together is a compelling story. As curator Dan Cameron tells it, he was putting together a mid-career survey of 49-year-old Peter’s integrated 3-D video sculptural work. As they discussed the work, Cameron saw a previously unrecognized aesthetic connection to the works of his 86-year-old father. That connection is the tromp l’oeil feature in the work of both artists.

Paul Sarkisian, a member of the avant-garde movement in L.A. in the 1950’s and 60s, with exhibitions at the Ferus Gallery and the Pasadena Art Museum, exited the L.A. art world in the 1970s in favor of a less commercial lifestyle in Santa Fe, New Mexico (where he still resides). While in this outpost he has accrued a huge body of work, laboring on large canvasses and other two-dimensional pieces, but seldom shows his creations. Among his earliest paintings are five enormous works, combining photorealism with tromp l’oeil features. While four of these paintings are permanently installed in venues in Europe, one remained at the Sarkisian Santa Fe compound, and is included in this exhibition. “Untitled (El Paso)” (1972-74) is a 168 x 252 inch painting of an old style, Western storefront. As Cameron explains, when you look at this work, you feel as though you can open the door and walk right in.

Paul soon shifted his focus to smaller acrylic canvasses, 46 x 46 inches on average, that look like collages of various papers, including newspaper pages and photographs. In spite of the realistic collage look, particularly of the lines of newsprint, these are entirely hand done. What the viewer perceives is not what is on the canvas. After completing these paintings, Paul abandoned tromp l’oeil, creating a few actual collages and many large brightly colored monotypes on his home press. From the 1990’s through 2009, he explored other media, including resin and polyurethane, creating works called “Untitled,” a few as large as 180 x 180 inches. In spite of the sheer quantity of works, his variety of styles and the depth and quality of his processes, very little of his forty-year body has been seen publicly prior to this exhibition’s opening. The father-son pairing features 22 of Paul Sarkisian works.

One can imagine what son Peter was doing and thinking while his dad was holed away in his studio for weeks on end. But the father’s obsessiveness and propensity to work until he exhausted every aspect of his creations passed on to his son. Peter studied photography and film at CalArts and the American Film Institute, then began working with video as a sculptural element in the mid-1990s. His output since then mirrors that of his father in terms of quantity, quality of the work and in the apparent exertion of enormous creative, intellectual and physical effort.

The artistic bridge between father and son may be the tromp l’oeil effect, but in Peter’s oeuvre, fool the eye is accomplished by manifesting a three-dimensional effect. This is accomplished mostly or entirely through video projections coming from within or in front of the pieces. Cameron has much to say about this process in the accompanying catalog: “There is something profoundly disruptive about the sorts of spatial illusions that drive [Peter] Sarkisian’s work, to the point where the more mediated one’s relationship with the outside world, the more likely one will experience Sarkisian’s art as a kind of instantaneous perpetual liberation from the limitations of digitized imagery.”

Among the 23 Peter Sarkisian works in this exhibition, each piece is distinctive in its process of creation and visual effects, as well as humorous in its theme and sound effects. To wit, “Cupʼa Joe” (2011) features the artist drowning in a mug of coffee; while “Book 1” (2011) depicts the artist crawling along a dictionary, writing statements on it such as “Wasted Space” and “Chech [sic] Spelling,” accompanied by the sound of pencil scratching. Some figure to stand out as crowd pleasers. “Registered Driver Full Scale #1” (2010) features a car side made of molded fiberglass, within which is a 3-D video of the artist driving, ever more wildly, against a video game backdrop of a city, with his worried father in the back seat. As Peter continues driving, swerving frenetically while drinking from a bottle of Modelo beer, the car windows become increasingly cracked. Yet, as this is virtual reality, no one in this artwork is hurt and the video comes to an end.

The piece in this show that figures to garner the most smiles is “Extruded Video Engine” (2007). This brightly colored fantasy machine is seemingly made of numerous gears from different time periods, all turning madly, while emitting sounds similar to the voice of Star Wars’ R2-D2. Yet the turning gears are entirely created by a video projection coming from within the work. About this piece, Cameron writes, “It is considerably more engaging in visual terms than the words and images that the media actually provide us.” Indeed, if Peter Sarkisian had his way, we would be living in a world where the projected image has more relevance than what we know to be “real.”