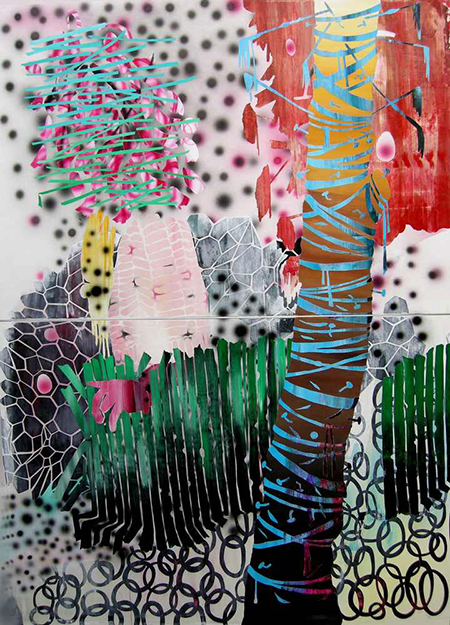 German born artist Udo Noger uses the elemental theme of light as his inspiration, source and both literal and metaphorical subject matter in his sophisticated painting/constructions. Titled "Water Has No Figuration," the stretched satin fabric surfaces are treated with mineral oil and mounted on medium to large sized three-inch thick box-like structures. These translucent armatures allow filtered light to fill the volumes and flow through them. The satin both holds and mutes Noger’s faint and fuzzy images of abstract and minimal shapes, suggestive of ethereal geologic structures or labyrinthine configurations of bones or smoke painted in rugged strokes of faint grays, light blue and soft white hues.

Most of the canvases are bifurcated, over and/or across areas in which the amorphous images seem to drift, float and or crawl and change. With their amoeba-like formlessness these shapes nevertheless to morph into powerful presences that poetically evoke the show’s title.

As light flows through the back of these vessel-like canvases before exiting their satin scrim surfaces, paintings such “Arena” and “Be Water” shift and change in subtle and luminously kaleidoscopic ways. One might regard this work in cinematic terms, as each piece functions as both a screen on which light is projected as well as the internal source of the image. There’s a synesthetic quality embodied in the bellies of these constructions; their hollow chambers are suggestive of resonating musical instruments, and one can almost hear a sonorous hum emanating from them.

Carlton Hatton’s first exhibition of mixed-media paintings at this gallery presents a bold young artist in command of his technique. His ambitious works on paper unfold a colorful and abundant flow of profuse marks and imagery that calms the eye by virtue of well-composed pulsations. With a deliberate nod to Japanese printmaking (not to mention American Op Art, fashion magazine layouts, popular music and Saturday morning cartoons), the artist constructs his works on paper with an apparently imbalanced abandon that resolves itself into clean, fully realized and highly sensitive spaces.

The artist executes his pieces, in part, by masking off spaces and sections of surfaces before brushing, spray-painting, and/or drawing in and around them. This allows Hatton to blend architectural muscle with Haiku tenderness. Pieces present multiple sections overlapping with layers of dots, stripes, cylinders and cell-like fractal patterns separated by softened hard-edged borders produced by the initial taping preparation.

Wholehearted effort, wholesomeness of spirit and an optimistic outlook radiate from the core of a work such as “Markers in Time.” This painting not only puts the artist's visual savvy on display, but conveys his emotional attentiveness to the world around him.