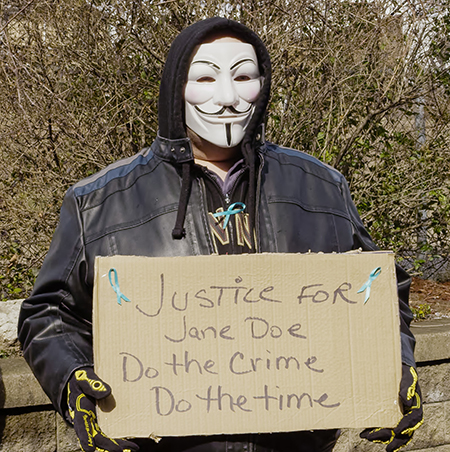 Google “Steubenville, Ohio” and the first entry that pops up is “rape.” The "#sweetjane" project by Andrea Bowers, an artist and activist in the tradition of feminist intervention, is a re-visitation to the scene of a crime — a communal rape of a teenage girl — and a scrapbook of the artist’s own Ohio childhood as that time unfolded in what we in Los Angeles refer to as “flyover country."

Now shamed and vilified, Steubenville is the kind of town that exemplifies “Friday night lights,” where the high school football team carries the burden of the town’s honor and identity. Whether or not the fetishization of football led directly to rape is debatable, but clearly women were dehumanized there. A native of Ohio, it comes as no surprise that Bowers would be interested in male privilege run amuck, for the artist inherited the mantel of protest from feminist artists, such as Suzanne Lacy.

In this project, Bowers traces how, forty years later, women are still blamed and slut-shamed for being raped, while the perpetrators are protected and forgiven and the local media reinforce male dominance. Validating that art should be engaged in current events and must energize the audience towards awareness and change, Pomona and Pitzer colleges present the imposition of external judgment upon Steubenville. Bowers shows how the scab was peeled off a social wound, exposing a suppurating rape culture. The desecration of one human being by a pack of teenage boys would have been covered up by complicit adults, who drove the victim and her family out of town, if the footballers had not filmed themselves in flagrante delicto, then circulated the images of violation and bragged about their deeds.

In the wake of these publicized prurient acts, the artist’s video of the protesters who came to Steubenville wearing the mask of arch-protester Guy Fawkes play on the dialectic between exposure and protection. Bowers graces the young victim with the benediction of Lou Reed’s "Sweet Jane," a lament for “Jane Doe,” belatedly protected by the court but only after her attackers advertised the rape through social media.

Sweet Jane became a hash tag when the “hactivist,” Deric Lostutter a.k.a. KYAnonymous, exposed the assault, forcing the community to confront the crime. The artist took up the exposé, observing and recording the trial and the protests, producing drawings and films that showed the defensive reaction of the publically shamed town, only now it was Sweet Jane who finally had the privilege of protection.

Bowers has recreated a town without pity, allowing the viewer to follow the ugly revelation and the reluctant resolution as s/he moves from campus to campus. There is melancholia to the presentation of the fragile lives of girls, and nostalgia surrounding the sad scrapbooks of small town life, and most importantly a lingering anger. We remember Suzanne Lacy’s 1977 feminist protest installation, "Three Weeks in May." Here we are thirty years after the introduction of “post-” and we now know that “post-feminism” means having to do feminism all over again in the name of all those “Sweet Janes.”