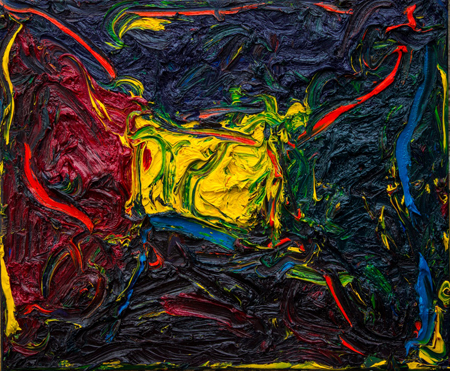 "IT’S ABOUT FU*KING TIME (Part One)" is the first exhibition that surveys the career of Los Angeles-based artist Norton Wisdom. Curated by artist and colleague Llyn Foulkes, the exhibition examines a vast body of work, mainly paintings rendered in rich, lush applications of oil on canvas that began in the 1960’s and which continue to the present. Using the picture plane and a basic series of lines that extend to the corners of the composition, the illusion of a three-dimensional space is created. The inherently flat canvas becomes a portal in which the eye is transported and experiences unexpected voluminous contours and density that inspire an introspection of time and space or the lack thereof.

To confront a painting by Wisdom is to both exist in the moment while getting lost in the unpredictable contours and grooves of the brush strokes, kaleidoscopic manipulation of color. Paint handling constantly shifts between two and three-dimensional perspectives. The work is grounded in a repetition of lines that force and frame perspective. "Untitled" (1974) serves as a blueprint for the architecture of Wisdom’s linear configurations. Using neutral tones of beige and browns, Wisdom restricts the eye within a three-sided box. The scene is ambiguous and could be a hallway without an opening or the dead end of a labyrinth. The bottom panel of the composition is rendered slighter darker, giving the illusion of infinite space. The frame or door rendered in an off white gradually begins to appear translucent, as if the eye can penetrate beyond it. Blue sky above fights to enter the composition, but it is abruptly reduced to a slanted trapezoid. "Untitled" (1978) introduces aggressive lines and darker delineations of space. The trapezoid pattern appears on all sides of the red square in the middle of the canvas. The surface,however looks as though it’s decaying as each application of paint erodes the layer before it. In this way Wisdom makes a static painting feel like a fluid and evolving work that changes over time and ages with the viewer.

In 1979 Wisdom stopped working in the isolated studio environment and began painting as a performance on stage with musicians. Llyn Foulkes’ role as curator of "IT’S ABOUT FU*KING TIME" is significant because of the mutual influence each artist had on each other’s practice. Wisdom recalls seeing Foulke’s works of monumental rock paintings in Los Angeles' David Stuart Gallery in the late 60s. It wasn’t until the mid 90’s that Foulkes became aware of Wisdom’s work, but soon the two began performing together. Wisdom would paint in response to the inflections of musical tones emitted from Foulkes’ famous “Machine,” rigged with horns, cowbells, organ pipes and percussion.

The energetic palette found in "Untitled" (1995) looks like confetti exploded within the oil paint. The color spectrum bounces and refracts from each angle and the perspective lines that were so prominent in "Untitled" (1974) have started to fade. No longer does the viewer feel as though they are standing inside an empty hallway but are immersed within a vibrant color field where hues are malleable surfaces that can bend and bleed into each other. The formal architecture begins to break down but the integrity of the surface continues to increase in complexity. "Untitled" (2013) echoes a similar fluid motion of the oil paint and the perspective lines are now camouflaged within the sections of the canvas.

At first Wisdom's paintings were like palimpsests where the texture of early layers hidden behind newer strokes would push through to the surface. By 2013 the application of paint appears effortless and appears to delicately sit on top of the canvas. Over time the perspective has become closer and closer to the viewer so that perspective transitioned from the subject to the ethos of the practice.