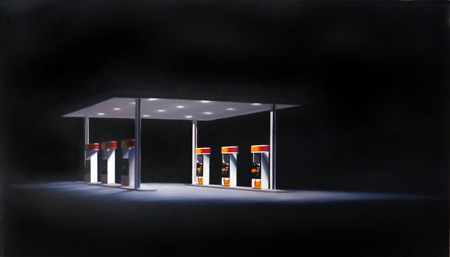 Lewis Mumford, chronicler of the culture of cities, reflected on the urban framework of personal forms of art, viewed ordinary signs and commercial structures as part of social creativity. He speculated that seemingly prosaic signs and symbols are often geared toward conditioning the mind.

Mumford’s ideas are embodied in Eric Nash’s paintings of familiar urban signs and their iconic implications. Nash takes us through the highways and byways of the city of Los Angeles, recognizing that for those isolated in cars, freeway signs and commercial edifices flash through a 60-mile an hour consciousness. By turning them into mysterious objects of beauty, he highlights their significance.

Working mostly with oil on canvas with a few charcoal drawings of cars and night scenes, Nash uses light and shadow to highlight the transcendent nature of Los Angeles, particularly our inimitable car culture. A fine example is the night view of a gas station in “7 – 9 – 11.” Here he invokes cinematic drama, capturing the suspense and mystery of a Hollywood film noir. The scene is devoid of human presence, but the gas pumps, spotlit like Hollywood stars, become the main characters. Though the painting evokes a magical quietude, there is nevertheless an aura of foreboding that does not beckon.

Nash’s depictions of Union 76 signs, on the other hand, command attention. Painted as huge orange orbs and showcased against either a stark night sky or against the glare of daylight, they become dynamic advertising. That he can view the banality of a 76 sign as a work of art is rooted not only in his attraction to 20th century Realism, but to his affinity for Pop art as well. Nash finds the ordinary worthy, bringing objects such as signs into focus, not only because they are around us constantly, but also because they can often influence us subliminally. The promise of adventure, for instance, can be conjured from a night view of an airport sign. On a conscious level, however, they provide ways to navigate the city.

Clearly evident are the influences of Ed Ruscha’s signage impulses and Edward Hopper’s pervasive sense of urban isolation. Also derived from Hopper is his use of illumination to induce mood. Yet Nash has developed a distinctive approach that reflects not only a sense of place, but the zeitgeist of his own time and culture as well. At the same time he conjures the atmosphere of noir-Hollywood and the presence of nostalgia is expressed in portrayals of the neon signs that grace old hotel apartments, like “Hotel Outpost,” or “Hotel Fonteroy.”

Though we are often forced to deal with the turbulence of the city, our cars isolate and protect us. Nevertheless, there is the need to be vigilant and pay attention to our surroundings. The act driving can be hypnotic. Split second glances at familiar images reach us on a lower level of awareness. Nash’s paintings of freeway and commercial signs, magically lit and enhanced, not only focus on their form and design, they highlight how significant these peripheral presences are in reality. Though his enhanced depictions call attention to their artistry, they also underscore how deeply ingrained these visions are in the fabric of our lives.