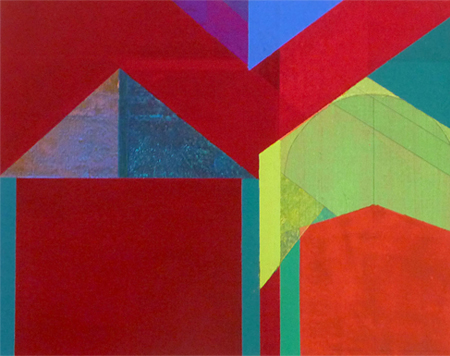 William Lane has been making exquisite color field paintings for several decades now, in the process honing his skills as a colorist to a very fine edge. Compared to the vast expanses of canvas we typically associate with color field abstraction (Rothko’s and Newman’s works being prototypical), Lane’s rectilinear abstractions tend toward sizes that in the heyday of the New York School might have been disparaged as retaining a too-close association with “easel painting.” Today, the modesty of their size counts in their favor as an eschewal of both the mythic and the spectacular. What Lane’s paintings pursue instead is intensity, a quality that in this kind of painting, bereft of both narrative drama and expressionist pyrotechnics, depends entirely on the energies released from the alchemy of color.

As Josef Albers was famous for drumming into his Bauhaus students, we rarely if ever see a color in isolation. The same color can be made to appear as two or more radically different hues depending on abutting areas of color. Color field painting exploits this phenomenon to push pigment color toward a luminosity and a virtuality it wouldn’t otherwise be capable of. The paradox here is that when these paintings succeed, they are apt to merely fulfill expectations: accustomed as we are to the phosphorescent color of TV and computer screens, we expect color to do nothing less than glow and shimmer. We are unlikely to pause to consider the compositional and coloristic finesse it takes to make painting, which is limited to the use of what is essentially colored mud, convey the illusion of luminosity. Thus, the accomplishments of painters like Lane, whose long career has been devoted to refining the means to achieve this crucial transmutation of pigment into light, may well pass unnoticed, except perhaps by other painters.

In the current show, Lane has on display five small paintings and a large one. The latter, a tour de force titled "Morelia," after a town in central Mexico — a country whose visual culture Lane credits as key source of inspiration — assembles three reds of almost equal value but varying temperature into a radiant arch holding down and locking into place rectangular blocks of fuchsia, white, slate blue and a creamy blue-grey. By carefully calibrating both the size of the interlocking elements and their color contrasts and using the fuchsia as an intermediary between the incandescence of the white and the earthiness of the reds, Lane is able to infuse the entire structure with the weightlessness of stained glass without compromising its opaque solidity. In "Green Dragon," at 24-by-48 inches the next largest painting on display, a mosaic of green tiles gets a vibratory boost from a fire-engine-red tile in the lower left corner. But the truly notable feature of this painting is the way Lane uses glazing to not only adjust his greens but to impart to them an ephemerality that makes them tinder for the fire emanating from the red corner.

A couple of small collages, "Small Triptych" and "Near Mitla" (Mitla being a noted archaeological site in Oaxaca), impress by their combination of smoldering color and delicacy of construction. To date Lane has been a largely neglected artist, but this show provides a welcome opportunity to sample the fruit of his deft touch and his hard-won mastery of color.