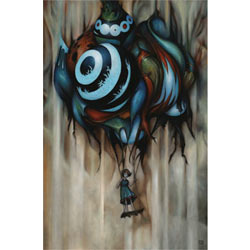 More than twenty years ago there was an exhibit at the then Otis Art Institute called “Beyond Illustration.”  It was a collection of artists who were working in what was then called “Lowbrow Art.” In the early 1990s these artists would form the initial phalanx of the school of art visible in Juxtapoz magazine. This art was considered lowbrow at the time primarily because it was illustrative in nature. It was representational, frequently narrative and generally highly chromatic. It was regarded at the time as a form of mass appeal eye candy. The “Beyond Illustration” show was a watershed that made the case this kind of art merited critical examination.

By the 21st century the shift in thinking has been complete. Now that we are living in an era of post post-modernism, all of the visual products of cultural history, including illustration, are considered by most critical observers to be, at least potentially, fine art.

Esao Andrews completed a BFA in Illustration at the School of Visual Arts in New York, has worked as a flash animator and produced work for DC Comics, so he is well grounded in the world of illustration and situated in the low-high barrier. He has developed an oeuvre with his painting that constitutes something of a sub-genre among younger artists. This increasingly populated niche is characterized by darkly fantastic visions derived from the world of childhood. These paintings conjoin fanciful and childlike elements within a richly rendered and painterly skin.

You might think of Andrews’ paintings as mutant fairytales for grown-up children. “Nina Madera,” a character in the Andrews lexicon, presents what could be a surrogate for the artist or viewer in contemplating these works. Nina is an elfin creature, seemingly standing on a cloud-covered promontory. There is a sweetness about Nina, in her outsized alpine cap and clothing, that evokes a sympathetic response. Then, with a kind of a start, the observer notices that Nina herself has two visages, a somewhat misshapen face that seems to convey both a pensive knowing guise and a sweet innocence. Not much lends itself to certain conclusions in the dark palette of this work. The haunted adult eye, gazing directly at the viewer from Nina’s mature avatar almost deflects attention away from the child’s second face, with its shyly downcast demeanor.

A more ambitious work is “Conjoined Bell” which, again, depicts an otherworldly and childlike female in an indistinct autumnal setting. This childlike creature seems to have three arms; one holds a sword, one an ancient flintlock rifle, and the third passively rests in the folds of clothing that greatly resemble brilliant butterfly wings. Curiously organic bells hang from twigs and branches that almost seem to grow from the youthful female. In a somewhat ambiguous manner, this highly pleasing but mysterious painting seems to be about metamorphosis, a multilevel progression from the human to the vegetative, from child to adult. The swirling orange background and autumn leaves at the female’s feet underscore this notion of transition.

Serpentine forms twist and turn into a balloon which hovers in the air in front of a beige curtain, bearing a young girl aloft in the painting titled “Balloon.” The sinuous animal forms that make up the parts of the balloon suggest some of the still life paintings of Baroque master Peter Paul Rubens. There is a depth of color and surface richness that is highly gratifying to the eye. But the air of mystery is inescapable. We seem to be gazing upon an unnamed microcosm and the destination of the young air-borne traveler is unknown. There is something subliminally fearsome about elements of the strangely biological balloon.  Perhaps the artist is suggesting that our physicality is a component of our imagination, just as our luminous dreams are invested with shadows.