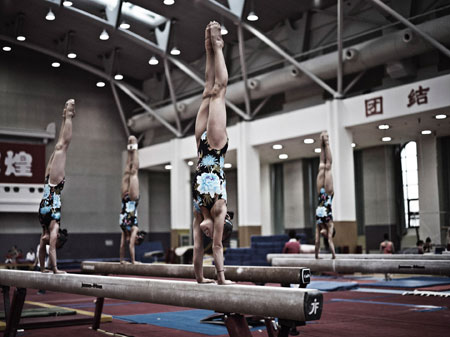 Time is an unknown variable in the photographs of Jonathan Anderson and Edwin Low. Granted unprecedented access for two years inside the training facilities of China’s elite gymnasts, the duo document the rigorous discipline of training that pushes the limits of the human form and challenges the psyche. Documenting the daily pressures of gymnasts in a country that expects nothing less than perfection, the duo’s access offers a rare look inside the commitment that athletes make to their sport and to their country.

In "Gymnasium" the camera is placed at the opposite end of an enormous and sterile training facility that is devoid of windows and drenched in artificial light. It is uncertain whether it is the early hours of the morning or the remaining hours of the evening as each large-scale color photograph is rendered with the same grainy veneer that feels part voyeuristic and part documentarian. Time is of no concern to the male gymnasts who are frozen behind various apparatus - the pummel horse, floor mates and parallel bars. Each athlete in various states of stretching their bodies is turned toward the camera, but their expressions are mute. It is difficult to decipher whether they are plagued by fatigue or if their daily practice has just begun. While the environment seems artificial to the viewer, we know it is a site of familiarity and daily ritual to the gymnasts. Dwarfed by the size of the training facility and the Chinese calligraphy placed around its perimeters, the athletes nearly disappear in the fluorescent light that shines from above. They have surrendered their individuality and committed their bodies for the chance to win an Olympic medal.

Acclaimed for their figurative, portrait, architectural and landscapes images, Anderson and & Low have collaborated since 1990. "ENDURE" presents a new genre in the field of sports photography as it resists a focus on the triumph or defeat of competition. Instead the series seeks to capture an intangible yet palpable source of motivation that drives the Chinese gymnasts to abandon their own identity in the name of cultural pride. Male and female bodies appear as classical Greek statues, with every muscle chiseled from the flesh. While their bodies are stunning they are remarkably similar to one another and thus the competition among the athletes presents the greatest challenge. The essence of "ENDURE" occurs at the schism between political idealism and the mortal limitations of the human form. The body and mind can only withstand so much tension until the individual begins to grow weary.