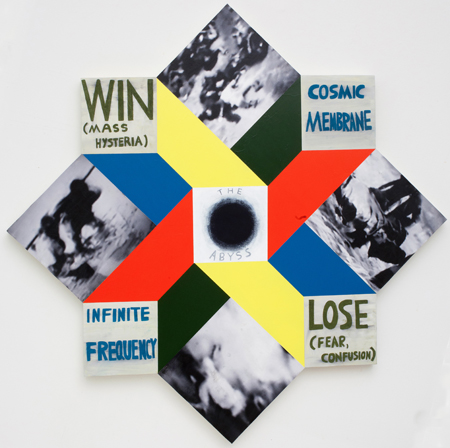 David Lloyd brings a slightly disparate vocabulary into a hybrid art form that is cobbled together, but which purposely does not become a complete whole. In his current show Lloyd marries the abstraction he has been known for with a newer, more altered state of narration. Combining the raw with the refined, he collages old, often blurry but poignant photographs, of subjects such as war, along with hand printed esoteric messages placed within precise architectural and mandala designs. The art is mystical, visionary, often ambiguous, matching Lloyd's efforts to make sense of the duality between the concreteness of everyday life and the elusive inevitability of death; between the hereafter and human obsessions with the spiritual.

The work looks sculptural, but is flatly two-dimensional. It takes form as Lloyd plans a varied and personal symmetrical design on plywood, adding a painstakingly carved edge that gives the impression of dimensionality, much like the edge of a painting. He maps out the intricacies based on the nature of the image to be created. There is a left side and an opposing right side, as is found in the human brain and in mystical writings to denote known and unknown forces. His mapping process involves planning the acrylic painted lines and shapes, their colors, composition and relationships, where a compelling photographic element will be placed, as well as selecting phrases that will heighten the message. Depending on how the viewer perceives it, in the end, Lloyd creates an altarpiece or shrine, where cherished ideas that have forever challenged the human soul can be contemplated.

"Yellow Death" concerns our obsessive worry about dying. Looking much like a religious crucifix, at the piece's center is a photograph of a huge, dead shark, hanging helpless and vulnerable. Two different arms open the monster's massive jaws to display rows of impressive teeth that pose no threat. Surrounding the center are painted curvilinear shapes of pinks, yellows, and greens, rendered meticulously to give the illusion of ethereal dimensionality contrasting with departing physicality. The softness of the colors and the time consuming method distracts us into dwelling on that aspect of the image. But two jarring messages are written on either side along the bottom. One tells us that we are “Having a hard time living because we are so bent on outwitting death.” For Lloyd his art is visual haiku, where questions are asked, but answers are only implied, never provided. It is also Lloyd’s way of hinting that the martyrdom of the shark is deceptive because death is not horrifying.

"The Abyss" is a pinwheel mandala set on a diagonal. There are four blurred images of war and four hand written slogans. In the center are stripes of color holding the image together to form a square that is tilted on its side. The piece alludes to cosmic principles, human folly, and our abilities to inflict optimal misery and fear. The black and white photos against the red, yellow and blue pinwheel comprise the center of the abyss, a black hole having billboards in each of its four corners that seems to turn with words such as: Win, Lose, Cosmic Membrane and Infinite Frequency.

Along with the paintings there are small works on paper in which the artist meticulously lays out shapes, colors and lines that convey a heated energy that, for Lloyd, equates with shamans and witch doctors in a trance. Made using a time consuming process that combines paint and digital technology, they have a psychedelic quality. When stared at they take us deep inside the image, where one may see fractals spinning and complicated patterns taking shape.

Lloyd weaves disparate parts into colorful compositions punctuated by penetrating iconography. He seeks to sideline what is irrelevant, expose hidden truths, and convey by suggestion far more that can be contained in a man-made image. Certainly viewers will find much to ponder.