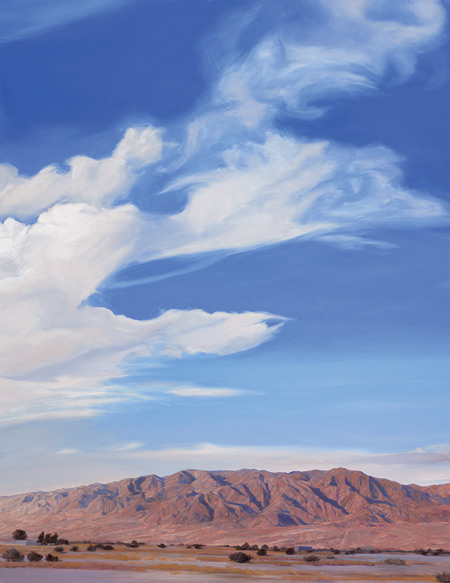 Angelinos often identify themselves as either beach or mountain people, referring, of course, to the massive ecosystems and the attendant recreational options that border the L.A. basin to its west and north. Fewer in the region turn their sights (or vehicles) east toward the great Mojave Dessert, unless they are en route to a show in Vegas or a game of golf in Palm Springs. Though she grew up locally in Palos Verdes, painter Mary-Austin Klein found her soul and honed her visual voice among the mountain ranges, sand dunes, shrubs and jackrabbit shacks of Southern California’s deserts. Her masterfully executed oil paintings stand as invitations to explore them with her.

Indeed, the desert’s austere fertility has cast its spell and attracted artists and other spiritual seekers for centuries. Klein’s condensed, somewhat small-scaled oil works, executed in precise realistic colors and detail, both bolster the desert’s grandeur and magnify its mystique.

In “Owlshead Mountains, Death Valley,” she presents an intimate look at a cluster of stout, sunlit hills whose muscular, sheered planes evoke Cezanne. The paint is thick, layered, almost sculpted in places; the feeling is of a feverish bonding through nature with the universe. Klein’s pale blue skies, with alternately wispy and voluminous clouds dancing through them, record the desert’s incredible range of color tonalities. Austin-Klein also expresses a feminine tenderness that balances the works’ boldness. “Wonder Valley” positions us at a considerable distance from a mountain range. Even so, the hills’ faintly lined crevices draw the eye inward, while the frayed hawk-wing-like clouds above them spark imaginative play.

A group of L.A. cityscapes seemingly set in one of the region’s many beachside communities round out Klein’s contribution to this show. Rendered in a darker and deeper palette than the desert paintings, these richly composed color-poems resonate with the kind of murky yearning and angst that we readily associate with the urban experience.

While timelessness in part characterizes Klein’s work, unthinkable speed, power and impending doom just a split second away engage our attention in John Brosio’s oil on canvas paintings of tornadoes. Long known for this subject, the artist delivers these twisters with a kind of harrowing focus that hammers home human helplessness and humility.

In “Edge of Town,” a man sits at a table in front of a lone donut shop on a desolate street, oblivious to a massive funnel cloud descends from the sky bearing directly toward him. Another image presents a seductive, if not surreal full moon set into a deep blue-black night sky, while ghost-like threads of a tornado drop down from an adjacent massive thundercloud into a nest of dust whipped up on the ground. The metaphor of the wind forging a stormy link between heaven and earth packs a powerful wallop. The question of such a benevolent partnership is topical considering the death and destruction left in the wake of the tornadoes that recently struck America’s southern heartland states.

Jason Kowalski’s paintings of old desert shacks, run down baseball fields, rusty vintage cars, abandoned motels with their sadly sophisticated lights and sign designs (among other quirky details) round out the exhibition. Not only does Kowalski succeed in creating “a vehicle to arouse attention to things that are often forgotten,” as he writes in a statement, but he does so with skilled playfulness, tenderness and technical brilliance. More informal than Klein’s work and absent the action in Brosio’s, Kowalski’s canvases nevertheless cause us to squint and perhaps even wince, as they stare into a past that needs their attention to retrieve, revive and for those old enough, re-live them.