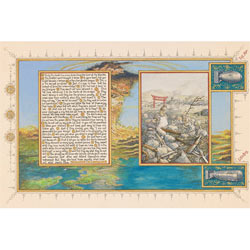 Sandow Birk is a satirist and a surfer, an expert draftsman and sly social critic. He is a contemporary artist with a love of tradition. His sprawling and widely praised body of work chronicles, mocks and honors, leaving seemingly nothing free from his keen-eyed attention and critical wit. Dante and death, riots and rock stars, skate boards and gang wars have all made their way into his finely rendered drawings and paintings at one juncture or another. Yet with his newest body of work, Birk eschews a propensity for irony, however dry, in favor of a more straightforward approach befitting his new subject, the Qur’an. Since creative takes on Islam’s holy book have rarely fared well (consider the Salmon Rushdie fatwa controversy that erupted around his book “The Satanic Verses” years ago), it comes as no surprise that published text about the project reveals a more cautious side of the artist, not to mention the gallery. Related press materials state not once but twice in case you were skimming that, “Birk’s ‘American Qur’an’ is not to be considered a ‘Holy Qur’an’ in that it does not contain the original text in Arabic.”

Birk’s project consists of handwritten transcriptions of English translations of the Qur’an, and gouache and acrylic illustrations drawn from images of contemporary American life. With characters set amid beaches and picnic benches, under freeway arches and in airport waiting rooms, it is easy for modern Americans to see themselves in the drawings and thus, in a smart trick, in the book itself. Having recently bid farewell to the Bush presidency, with its inflated rhetoric against the Axis of Evil and suspicion of all things Arab, Birk’s project could not come at a better time. As a country, we may have turned from the racism and bigotry that administration inspired, but a general misunderstanding and sometimes distrust of Arab Americans and the Arabic world prevails.

Birk’s interest in the project derives from his travels around the world, particularly to Muslim countries, and a resultant curiosity about how the message of the Qu’ran fits in with day-to-day life in 21st century America. The obvious angle of this work questions how the purportedly universal message of the Qu’ran speaks to Americans. But it does more than this; seeing ourselves reflected in Birk’s brightly colored paintings and carefully hand-lettered text, rendered in the tradition of Islamic illuminated manuscripts, brings a sense of universality and inter-connectedness not possible via even the most in-depth academic discussion. Instead, a visceral sense of relatedness crosses the ‘self’ and ‘other’ divide as ingeniously as Birk has traversed less far-reaching chasms in prior works.

Or perhaps it is more that, at least in this body of work, the direct fusing of one style or scene with another remains (almost) devoid of opinion or perspective. There is no challenge or joke, only the replacement of Arabic people for American ones, of calligraphic text for graffiti letters. But there’s a hitch, the characters presumably don’t practice the religion of the text (nor, confirms the gallery, is Birk a Muslim), which begs another question: What will the artist’s American Qu’ran mean to a practicing Muslim?  Will it be seen in the honorific and respectful light that is clearly intended, or will be read as a jab, another Western takeover or even a desecration? Therein lies another, deeper level of Birk’s ambitious and laudable endeavor.