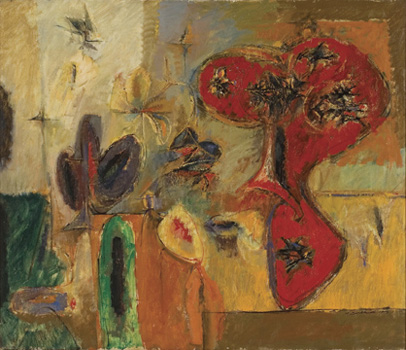 Beneath the ferocity of Hans Burkhardt’s exacting brushwork and application of oil paint there is an undeniable remnant of hope that appears consistently throughout the works in “Within and Beyond the Mainstream.” Burkhardt’s bold moves on the canvas are akin to the call of the Sirens, luring the viewer into the field of vision so that the artist can impregnate them with an uneasiness that begets action. A painter of modern life, Burkhardt boldly reacted to the indecencies and injustices of war. While he was censored he was never silenced.

“One Way Road” (1945) is a surrealist depiction of a blood stained road lined with carnage and decaying bones on either side. Towards the horizon a makeshift arc constructed of human remains houses a blood red rising sun. Despite the tortured and contorted forms that one can faintly hear echoing along the road, that sun points to a day that will not bear witness to the destruction of humanity. Burkhardt saw and believed that hope existed even in the darkest and most destructive moments. Consistent with the political paranoia of the time, the painting was assumed to be Communistic because of Burkhardt’s use of red.

Years later “La Brea Tar Pits” (1975), a large-scale painting dominated by an intricate black and grey labyrinth of varying textures and patterns, amounts to a visual critique of the city’s major museum. The tar has risen and is consuming the site of Los Angeles County Museum, dwarfing a flag at half-mast at the uppermost portion of the composition. LACMA is in over its head, literally buried in the tar of its host park.

While Burkhardt was born in Basel, Switzerland his works juxtapose an intimate view into the mind of an artist with universal concerns of mortality, loss, love, unity, and the quality of life in the modern world. From the time of his arrival to Los Angeles in late 1937 he became an essential piece in the puzzle of the L.A. art scene, but never feared to be critical of its establishment. As its title suggests, Burkhardt straddled something of a contradictory position in this respect.

The works here represent the arc of Burkhardt’s painterly narrative dating from his early L.A. paintings, continuing with his anti-war paintings of the 1960s and ‘70s and climaxing with his final series entitled “Black Rain.” While each period expresses a distinct social interest, they are unified by extremes of texture that the artist always favored.  In addition to working with oil paint and manipulating his brush to achieve various degrees of articulation, Burkhardt enlisted the help of his friends who worked on Hollywood sets, who would salvage the skins of acrylic paint that formed around the rim of the paint buckets. The application of the dried acrylic created an unexpected surface with dimension, depth, and weight.

Created in reaction to the Vietnam War and in protest of the deaths of some of his own students, Burkhardt’s “Lang Vei” (1967-68) incorporates human skulls on a surface that looks as though the paint was carved out, as if the painting were an excavation site revealing the fallen. In many ways Burkhardt served as a painterly journalist forcing us to see what many simply turn away from.

“Within and Beyond the Mainstream” is emotionally overwhelming at its high points, but always balanced by moments of playfulness and Burkhardt’s openness to stretching his formal solutions to their extreme. The trajectory of his work ran throughout Abstract Expressionism, Cubism, Surrealism, and shares close ties with Arshile Gorky. Burkhardt was a driving force and a key piece of the story of how the art scene in Los Angeles took the shape it did over the course of the late 20th Century.