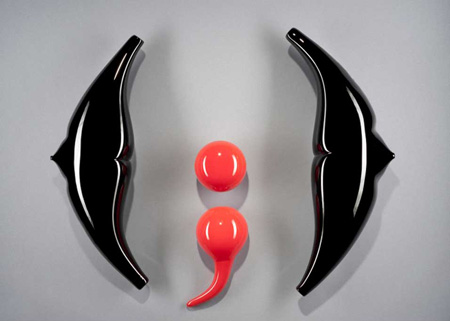 In “Parenthetically Speaking:  It’s Only a Figure of Speech,” San Francisco-based artist Mildred Howard deploys blown, hot-sculpted glass to question the nature of language and the relationship between content, mystery, and imagination. The installation, conceived in 2010 while the artist was in residence at the Pilchuck Glass School in Washington State, consists of forty oversized punctuation marks, proofreading and mathematical symbols, and musical notation. By turns black and red, the symbols are placed in various configurations, as they would appear in sentences, except that there are no words, no sentences, no alphabetic characters at all. The viewer must fill in the blanks between punctuation marks and concoct a working narrative of what each arrangement might mean. The literal space between the symbols, then, is complemented by the psychological space afforded the viewer’s imagination. What is being communicated, and why, and can vestiges of referential meaning be telegraphed by seemingly implacable placeholders?

Howard drew her inspiration for this body of work from the poem “At the End” from Quincy Troupe’s anthology, “Transcircularities.” In part the poem reads: “In space the end is/the beginning/of another end ... & death being/only a period at the end of a sentence...” Howard’s works concretize Troupe’s allusive take on punctuation, suggesting a semantics that implies much while saying little.

Across the gallery’s walls are strung parentheses with only empty space between opening and closing. There is the pregnant pause of a question mark with no question and no answer; and an exclamation point whose adamance we can only guess at. Quotation marks convey something unknowable said by someone unknown. Something is underlined for inscrutable emphasis. A bass clef hints at unsung music. Brackets and decimal points intimate someone’s bank balance. Ellipses hang on the wall, trailing off into space like so much unfinished business.

These works are conversations without content — and yet, for deconstructions, they are remarkably sensual. Their high-gloss finishes evoke lipstick and nail lacquer. Their contours are curvilinear to the point of becoming biomorphic. The curvaceous brackets, in particular, are blush-inducingly sexualized, looking for all the world like a pair of shapely legs, buttocks, and hips. Each symbol has a unique personality. These are not deductive forms created from prefabricated molds; they are born of fire and improvisation. Bulbous and liquid in appearance, they exist resolutely in three dimensions — a jolt for considering that we are used to seeing words and symbols in newsprint or on a computer screen. That Howard is able to imbue marks and symbols with so much life and humor is an achievement that, in our content-saturated but meaning-deficient culture, feels nothing short of revelatory.