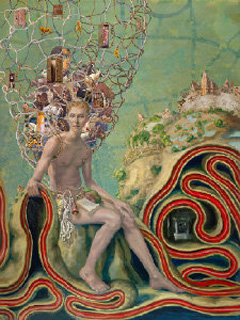 Full disclosure: I knew this show would be good before I viewed it. Not to say I didn’t give it a critical look-over, but rather, given Julie Heffernan’s track record, some preliminary jpgs, and reception of work from the same series that showed last year  in New York (at PPOW; the current show includes newer works), it was clear to me that this Brooklyn-based painter had another hit on her hands.

Heffernan’s work here, as in the past, is richly detailed and brilliantly colored — a riot of reds, oranges, yellows, and greens pervade. They reflect the artist’s lyrical talent with the medium along with her beautiful imagination. Heffernan is able to deftly relay unique, fairy tale–like visions of her world. These works are autobiographical and strongly rooted in art history. The visually luscious Old Master style riffs off traditional still live symbolism — a pile of dead birds sit upon a central female figure’s lap in “Self-Portrait with Talking Stones” (2011) for example. These symbols of abundance, feast and nourishment are presented and brought into the present with a good dose of surrealist dreaminess. Variously, rocks float in the air; a figure wears a headdress of fruit; the ground is folded up like a bundle of cloth.

Akin to Heffernan’s earlier work, these paintings feature a singular, centrally placed figure. But whereas before the figure was always female (and a self-portrait), several of these new works feature a young man who, it turns out, is her son. The back-story: Heffernan’s son is leaving for college. In one painting, “Picking Up the Pieces” (2010), this central figure has on his back a huge bundle collected into a rope net; around his waist is a tool belt stuffed full. The symbolism is clear — he leaves with baggage but also the tools to deal with the challenges ahead (off to the side there is also a rock and next to it a sign that reads “Hard Place”). In another work, “Self-Portrait with Falling Sky” (2011), Heffernan contemplates her new state of uncertainty: rocks hover and float around the central female figure, none of them, however, touching her. Her world is up in the air, but there is the sense that it’ll all work out right.

Heffernan’s works not only feature the overarching symbols, surroundings, and objects that speak to the storyline the main character is engaged in, but also comprise numerous vignettes that may or may not seamlessly gel with the larger narrative. They’re tangential offshoots or breaks that keep us on our toes — and sometimes they are so well integrated in the visual abundance of the work, they may not get noticed until a second, third, or fourth look. Many of these scenes or images are inspired by NPR, which Heffernan listens to almost constantly, providing a topical twist to the work, which, because the origin is a mass-media source, might well resonate with that audience.

All but one (a limited edition print) among the thirteen works are oil on canvas, and mostly large in size. As a group they embody a visually complex and stunningly rendered timeless tale of the human condition that continues to reveal fresh details over time.