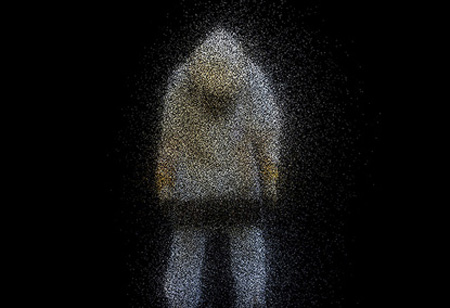 Lita Albuquerque seeks to expand possibilities of process by challenging the limitless physical components of the physical universe. In her latest exhibition, she discovers how a simple change - using air currents to make marks, or recreating bee activities digitally - can open up unimagined possibilities that lead to complex systems and patterns. “Emergence” brings together two series – “Red Pigment Paintings” and “Beekeeper,” both projects begun in 2005 which continue to bear unexpected results. Albuquerque’s keen artistic and scientific mind demonstrates that shifting perceptions of possibilities, from the known to the unknown, inevitably leads to a shift in creative outcome.

Actualizing the philosophy of Maurice Merleau-Ponty, the noted French phenomenologist, Albuquerque seeks to find situations where nature ends and human expression begins. The “Red Pigment Series” process began with her applying multiple layers of ivory black pigment laid onto the canvas, creating an empty matte surface. While still wet, she blows red pigment powder onto the panel’s surface. The conduit of air pushes the pigment to move in random variations. The black background and fiery red irregular strokes have a raw inchoate appearance, whose purpose has nothing to do with forming a recognizable image, but moves the natural to the creative. The mind naturally tends to associate the bright red shapes against black with volcanic eruptions, bursting flames, splashing water, and other familiar images.

“Beekeeper” is a collaborative effort with Jon Beasley and Chandler McWilliams, a computer generated digital installation with a set of photographic prints. Museum curator Grace Kook-Anderson explains that a computer generated “image of a beekeeper is in a constant cycle, dissolving from a solid form into a sea of wandering pixels, and then emerging whole again as the pixels re-condense the figure.”

Albuquerque’s initial desire was to show the similarity of a beekeeper and an astronaut – one maintaining life on Earth, the other maintaining life in the Cosmos. It turns out that transmutation is a better description; that the activities of the beekeeper share much with the workings of those who go into space. Breaking through limits of scale allowed the team to make this discovery.

Both exhibitions show how Albuequerque seeks to discover hidden relationships, untried possibilities of the physical world that reveal information that every particle carries. She sees the totality of physical existence as a vast palette from which can be discovered relationships of light, atmosphere, air, space, movement, time, and energy, whether on a macrocosmic or microcosmic scale. That there are therefore infinite possibilities to ponder in her hands assumes the air of adventure.