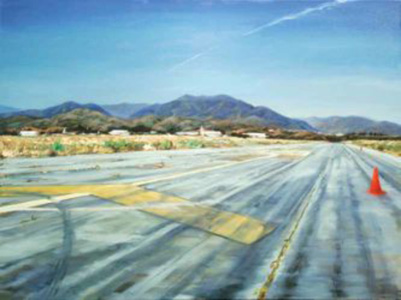 There is an air of blue-toned melancholy in the art of Jorg Dubin. His paintings of a stretch of Orange County stripped of nature and covered with the culture of war convey the desecration left behind by the abandonment. Dubin depicts the vast and deserted tracts of concrete marked with tire tracks, painted lines of force and determined grass forcing its way through the cracks. These runways are now lanes to nowhere. Named after films that have film and direction-based titles, such as “East of Eden” and “North by Northwest,” the works are meditations on melancholy. Once upon a time, there was a huge air force base in Orange County, called El Toro, opened in 1943. Home to the Top Gun flyboys, the base was closed in 1999, an event which opened a Pandora’s Box of acrimony and contention over what to do with the sudden acquisition of land. Eventually, the forces of Green prevailed and the Base became the Great Park, sporting a gigantic orange balloon, a carousel, and now an art gallery. The Great Park is anything but park-like.

Dubin works in the time honored tradition of early California painting, plein air, an aesthetic descendent of Granville Redmond and William Keith. The series of mid-sized paintings on display are hardly about pristine untouched New World nature, but rather about Life After People. The horizon lines are high and the dark tonality of the paintings defies the searing bright white light that actually bakes the Great Park. “My Blue Heaven” foregrounds a plowed-up stretch of land reminiscent of Dorothea Lange’s depression-era photograph “Tractored Out.” Above the deep blue ruts, marking the distant horizon are non-descript military hangers and utility buildings, strange orange-pink walls and a distant row of dark navy mountains. No planting, no reclamation has been done, but a few determined stalks of weeds push their way above the grooves below the pale blue sky.

The melancholy of these paintings is countered by the artist’s downscaled sculpture of the once ubiquitous F-18 fighter jets that used to watch over Orange County. These jets have been stripped of their threat level with a coat of white paint and a design of the Louis Vuitton monogram: LV. The artist has also contributed a large wooden table, “Wing Table,” which is a replica of a wing of a plane, including its markings and flap. The table is mounted on a quartet of miniaturized missiles. Any Tom Cruise fan would be proud to have this sculpture in his man cave. “Crusader’s Wing Man,” featuring a pilot in the cockpit, is also the Top Gun spirit at its best. The paint handling is crisp and clean, combining the old-fashioned comic book look of Roy Lichtenstein with the new video game look of the latest action movie. Hey, Maverick, you can be my wingman any time.