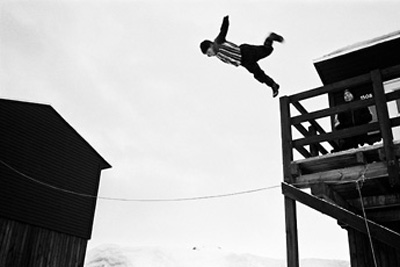 Five spacious rooms, each featuring a series of works by a different artist — Jim Goldberg, Daniel Schwartz, Zanele Muholi, Jacob Aue Sobol, Richard Misrach — comprise this wide-ranging, direct, and personal photography exhibition. Like the book project from which the exhibition takes its name, published in 1929 by German photographer August Sander, this show aims to capture our contemporary moment in time by looking at the “faces” (mostly the photographs feature people, save Mirach’s series, which features graffiti in post-Katrina New Orleans) of specific situations around the world.

The show opens with poignant as well as beautiful images from San Francisco–based Goldberg’s series “Open See.” The series comes out of a project documenting new European immigrants and focuses on the African countries they come from. The people photographed, all of whom are desperately poor, are often facing the camera and shown within the context of their surroundings, be that a small hut or standing atop a pile of rubble. Throughout, they exhibit an undeniable strength — which, we assume, can only be known by those who have survived deplorable situations.

In the next room are thoughtful, meditative works from Schwartz’ series “Traveling Through the Eye of History.” From 1995 to 2007, the artist captured images along the historic Silk Route, which travels through parts of central Asia, Afghanistan, Iran, Kashmir, western China, and Mongolia. Especially as regards areas that have been heavily affected by war (particularly Afghanistan), these are refreshing for their everyday look. And while we see signs that conflict has taken place — most notably the large empty space in an Afghan hillside where a giant Buddha (destroyed by the Taliban) once resided — the images aren’t about the drama of particular moments in history. This is what you see, what you experience, just being in this place; these are people going about their daily business.

South African photographer Zanele Muholi presents straight-ahead, formal, background-less, black-and-white portraits of transgendered and homosexual South Africans, people who are often targets of violence, discrimination and ridicule. We are informed that even the most violent acts against these people go unpunished because there are no laws regarding hate crimes in South Africa; some of those photographed have died as a result of this violence. The works are undeniably powerful; the strong, direct, “everyday” people — none of them stand out visually in any obvious ways — who serve at Muholi’s subjects put a face on a horrible circumstance.

Aue Sobol presents candid shots from the life of his girlfriend in her hometown of Tiniteqilaaq, a small fishing village in east Greenland. The work is intimate and has an atmospheric quality. The haziness, off-kilter angles, and personal moments captured balance the rest of the exhibition, which elsewhere is more formally polished.

The exhibition ends on a sad but somewhat humorous note, with Misrach’s post-Katrina images of graffiti messages on New Orleans homes that were devastated by the floods. These works feature not one person (or any other living being, for that matter), but are nevertheless alive with raw human emotion: sarcasm, disappointment, sorrow, and anger. This is what happens when you have nothing more to lose. From the undeniably funny “wicked witch” painted on the side of a house, with an arrow pointing down to the ground, to the defensive and confrontational “I am here; I have a gun” painted on boarded up windows, Misrach deftly, elegantly conveys the wide range of reactions elicited by those who suffered the worst of the storm.

These artists put a human face, one we can identify with, on situations a great many of us have no personal experience with. They bring far-away situations into our direct contact, without drama or fanfare. These instances are as remarkable as they are ordinary. The power of the exhibition, then, lies in the ability of these works to touch on intense, loaded, or very personal subjects and remain fascinating to fully digest. These works don’t punch or shock; they gently, beautifully present our reality, and are an opportunity to take it all in.