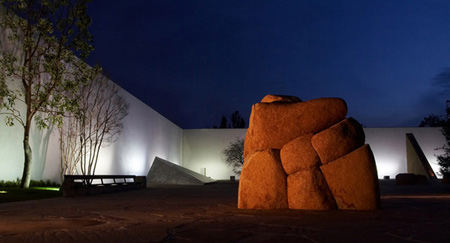 Given that it’s “California Scenario’s” 30th anniversary, the emphasis here is on illuminating our appreciation of it. The model and a large schematic drawing offer a clear view of Noguchi’s intention of celebrating the diversity of California’s landscape, including rivers, mountains and vegetation, both sparse and desert-like as well as verdant, as exemplified by redwood and sycamore trees. It is ingeniously tucked in a 1.6 acre plot between office buildings, a restaurant and a parking garage. It is a site of remarkable beauty that the exhibition rightly celebrates, but it does not do complete justice to. Three decades after its completion, the garden has gained character, much as a human face subjected to rigors of life and passage of time, something that the overly glossy photographs do not convey.

“California Scenario” was commissioned by art patron Henry Segerstrom, who reportedly remarked that the installation included nothing that was actually fabricated by the master’s hand (landscape architectural design firm Frederick Thomas Hume handled that). Noguchi responded with “The Spirit of the Lima Bean,” a massive yet uncannily graceful rock sculpture that gave a nod to the Segerstrom family’s beginnings as lima bean farmers.

Still, since the large installations are in Costa Mesa and Los Angeles, and thus easily accessible to Southern California audiences, replications are somewhat upstaged by the segment titled “What is Sculpture?” It focuses on Noguchi’s Akari light fixtures/sculptures that he first showed at the 1986 Venice Biennale. The term Akari implies both illumination and weightlessness, appropriate since the pieces shown are made from mulberry tree paper or gossamer materials suspended over wire armatures. Located in the museum’s center gallery, it is an arresting sight, yet Noguchi followers might remember that purists balked early on at embracing lamps as art. Today they evidence the vast range of Noguchi’s experimentations and of his influence on design. (Noguchi also designed furniture as well as set designs for dancers Martha Graham and Merce Cunningham.)

Less known perhaps is a series of sculptures from steel plates that were produced by Gemini G.E.L.  The pieces are displayed in a manner that allows one to take in their number and variety but, it’s a safe guess that single works were meant to be shown alone as to interact with their environment via an interplay of light and shadow.

This unusual exhibition demands study, reflection and a deeper look into the life of an artist who was shaped by the bi-racial and cultural roots of his parents (American teacher/editor Leonie Gilmour and Japanese poet Yone Noguchi) and who made the most of the choices they presented.