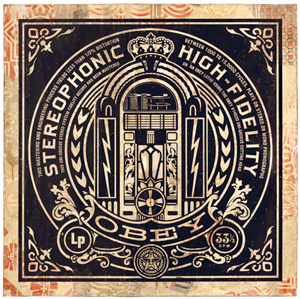 A collaboration between Obey Giant Art, Subliminal Projects, and Robert Berman Gallery, "Revolutions" features 80 original album covers inspired by Shepard Fairey's diverse musical influences including the Sex Pistols, Public Enemy, and Black Flag. "Revolutions" speaks to the impact music has had on Fairey's art practice long before he was even an active street artist or aware of the gallery scene. The title "Revolutions" alludes to the movement a record makes on a turntable, recalls the anthemic Beatles' song "Revolution," recognizes social and political changes, and speaks directly to the revolutions that have occurred in the music industry during the artist's lifetime. The album was not just the delivery agent for music; the album cover was itself an artistic statement that is now vanishing in the digital landscape. Thus, the title signals an acknowledgement of a disappearing culture, but also celebrates the nostalgia for vinyl and its power to bring people together, along with an implied hope for carrying analog into the future.

Presented on 12" x 12" framed album covers, Fairey culls images of jukeboxes, old-fashioned microphones, lustrous women, intricate guitars, and stylized musicians that span decades on archival tea-stained paper, rendered via printing press, silk screen, and mixed-media collage. Additionally Fairey injects the bold typeface and vernacular of "Obey," which he created with his iconic rendering of Andre the Giant, into the cover art. The messages are quick-witted phrases that engage the viewer on a visual and semiotic level, asking that they "obey long playing records" and "amplify your voice." Obey becomes a fictitious record company situated in a building similar to Capital records. The extensive catalogue consumes an entire wall of the gallery floor to ceiling--a near shrine to artifacts of the past that Fairey projects into the present. It is only when viewing the eight larger pieces on 41 1/2" x 41 1/2" paper that the intricate layers of mixed-media collage become apparent. While they are rendered in Fairey's stylized hand they are imbued with the zeitgeist of an earlier time.

Although at times redundant, the works presented in "Revolutions" speak to Fairey's aesthetic of bold typography and complex mixed media, providing a meditation on a subject matter that we have not seen before in such detail from the artist. Who knows; given his sphere of influence in pop culture, it may help to revive a fascination with albums.