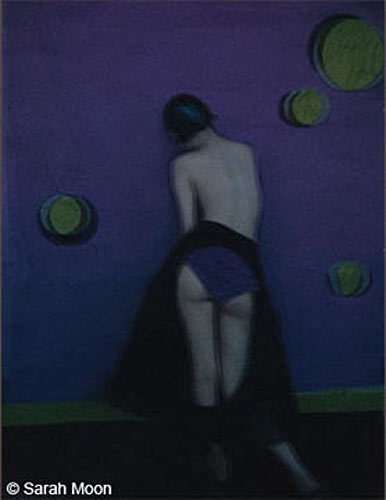 “Coincidences” celebrates the first Los Angeles solo exhibition of French photographer Sarah Moon, featuring a selection of over seventy black and white and color photographs culled from her commercial career and personal collection.  The selection here not only represents a 35-year career marked by a rich and textured photographic style, but points to the diversity of her works as these shift between austere landscapes of flora and haunting abandoned spaces, color carbon photographs of beautifully dressed women concealing their visage from the eye of the camera, and surreal portraits of models in designer garb. Credited as one of the first female haute couture photographers, Moon collaborated with such iconic designers as Chanel, Cacharel, Comme des Garçons, Christian Lacroix, and Issey Miyake. Moon’s fashion photographs are a departure from traditional styles wherein the model is a static mannequin modeling a piece of couture.

Moon leaves the borders of her photographs intentionally rough, creating a frame within a frame that marks the photographer’s own awareness of the contextual meaning and impact of photographs.  In turn she asks that the viewers observe her works beyond the subject matter, that is, to note as she does that they are more than pictures of beautiful women or beautiful clothes. In her overall working process the photographs are intensely manipulated in the dark room, carefully handled, and deeply imagined. In “Dior, 1990” a model wearing a pleated dress with a kimono-inspired folded back turns her back to the camera and holds her hands in the air. She wears black gloves, which illuminate this gesture of being frozen in her tracks, while her oversized black hat extends to her shoulders concealing her face, leaving her reaction a complete mystery. A toned silver gelatin photograph, “Dior, 1990” exemplifies a moment common in Moon’s portraits, in which the clothing worn by models seems to consume them completely. It is as if the person has vanished into the black and grey background which seems to extend into a realm of uncertainty we sense has been crafted by Moon’s own hand in the developing process. The model appears to exist in two spaces simultaneously: the space in front of Moon’s camera and the unseen.

Moon’s desire to study the human form through haute couture establishes a theme consistent throughout “Coincidences,” which speaks to vulnerable female subjects and their intense desire to cover their eyes despite their physical beauty.  “Avril Pour Alaia 3, 2009” presents three women each wearing a polka dot skirt and midriff bodice top. The woman to the far left appears in profile, leaning onto the woman next to her who has her back to the camera and also holds up her hands in mid-air. The third woman faces the camera but has her hands folded one on the other, thus covering her eyes. The photograph is surreal, as their bodies eerily resemble ghosts who are quickly disappearing from the composition. In many of her landscapes Moon either presents Amazonian flora or women walking down a long stretch of road. In “Suzanne aux Tuileries, 1974” a woman in a mink coat walks alone in a park, following the faint patches of light let in by the trees overhead. A small dog trails several feet behind,  the woman unaware of its presence. She continues forward with her head bent down. The photo is mesmerizing not only for its beautiful composition and the play between shadow and light, but establishes an entire narrative about the identity of the woman, why she is walking alone, and where she is going.

“Coincidences” is a collection of nether-worldly photographs inscribed with narratives of identity, questioning the relationship of physical beauty with a sense of self, and making sense of a surreal world. While Moon is both a commercial and fine arts photographer, she balances the dance between the two practices as gracefully and unexpectedly as “La Funambule,” the robust tightrope walker who gracefully balances herself to the other side of the line.