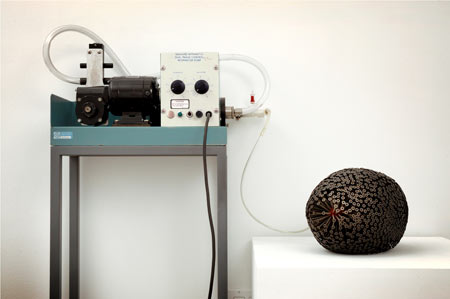 Just as anticipation is building for “Pacific Standard Time,” the multi-venue collaboration that will reappraise and celebrate contributions by earlier generations of Southern Californian artists, the Orange County Museum of Art unveils its “2010 California Biennial,” answering that nagging plea: “What have you done for us lately?” Championing the diverse efforts of nearly fifty emerging artists, the Biennial speculates on identifying and supporting work by new talent capable of extending and enhancing California’s artistic legacy.

"Whether people love or hate them, biennials are very much anticipated, desired and needed by the artistic community. They are our versions of the Oscars or Emmys," says Ann Philbin, Director of the Hammer Museum. Obviously biennials can boost the careers of selected artists. But they also influence perceptions of the institutions which house them as well as the curators empowered to signal “thumbs up” (or down) to participants. The Hammer is currently planning a 2012 biennial featuring L. A. artists in collaboration with LAXART director Lauri Firstenberg, guest curator of the expansive 2008 OCMA Biennial (which was lauded by some and criticized by others for “littering” the museum’s exterior parkways with Patrick “Pato” Hebert’s personalized political lawn signs and Sam Durant’s bilingual immigrant rights banners).

Sarah Bancroft, this year’s OCMA biennial curator, has been edging towards the West Coast since receiving her MA in art history in 2000 from London’s Courtauld Institute. Currently a PhD candidate, Bancroft did curatorial work at the Guggenheim Museum in New York before joining OCMA in 2008. She admits to the difficulty of asking the Biennial to capture the pulse of artists working across the state and questions if “looking at various biennials over time reveals specific trends, focuses, and occurrences or simply highlights the varied interests, strengths, lacunae, or weaknesses within the curators’ disparate visions.” Electing to respond to “what is happening” rather than dictating a theme, Bancroft did extensive research before traversing the state, interviewing 150 artists. Those she selected for this exhibition are an eclectic group, employing a wide array of practices intended to engage, perplex, educate and inspire viewers.


Many 2010 Biennial participants came to California to work with influential artists who conduct the MFA programs that have expanded exponentially in numbers and scope over the last several decades. Once here, Biennial artists settled in California, honing their work while contributing their voices to our versatile art community. Even some of the youngest, born in the 80’s, secured gallery connections, grants, teaching positions or museum shows before the downsizing of the last three years.

The collective Electronic Disturbance Theater/b.a.n.g. lab jumps into the debate with their multimedia contribution, “The Transborder Immigrant Tool (TBT).” Poetry and performance are wed to cast-away mobile phones that function as personal safety navigation systems and water stash detectors in Mexican-U.S. borderlands.

Taravat Talepasan expounds the conflicts between Iranian immigrant life and American mores with “The Censored Garden,” featuring a traditional painting on gold leaf, assaulted by pixilated imagery. “Angel of Iran (Dirty 50cc),” an MB5 motorcycle she ornamented with painted enamel roses, illustrates the injurious effect roving bands of religious police have on citizens who fail to abide by their constraints.

Sherin Guirguis offers “Bein El-Qasrein,” a 96” tall, ornamental, interactive, carved wood sculpture modeled after a bulbous Bedouin earring. The work can be rocked in a wide arc, but always recovers its balance. Her triptych “Untitled (Dome),” delicately constructed of mixed media on paper, suggests the screens that separate public from private life in Egypt.

Even museum guards deviate from their assigned rounds to dance through Nina Waisman’s remarkable interactive sound installation, “Between Bodies/Tijuana.” The work is composed of hanging electronic audio components, each cluster emitting sounds recorded in Tijuana: music blaring, women sweeping, cocks crowing, activists typing documentations of toxic manufacturing practices, etc. Lines of sensors are arranged close enough together so that one person can modulate volume and pitch, creating their own medley of urban sounds, but the work gains complexity as more visitors join the mix.

Patrick Wilson’s deliberate buildup of layers of color produces sublime results. Among a number of other worthy works are photographs by Katy Grannan and Dru Donovan, and Alexandra Grant’s word play. Interactive installations not to be missed include Agitprop’s mobile interview cart; Juan Capistran’s DIY backyard party; the L. A. Ranger’s station; Finishing School’s installation; Brian Dick’s museum mascot project. As you make your way through the exhibition, consider what you would select to add to the permanent collection and how that work might color perceptions of OCMA and California’s artistic future.