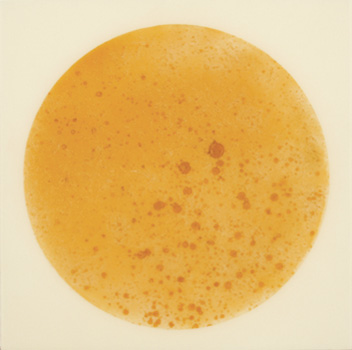 Eric Adrian Lee's solo debut in Seattle at Gallery IMA was a modest but promising group of 15 mostly square, abstract paintings that all employed subdued earthy colors, but that were each different from one another. Drawing on a range of processes--pouring, staining, soaking, scraping, sanding, and gluing--Lee creates grounds for contemplation and meditation. Now living in Portland after studying in Illinois (BFA, 2002, Greenville College), the 30-year-old painter gives viewers echoes of abstract expressionism, French postwar quietist gesturalism, Asian brush painting, and modular minimalism, all fused into an evolving, if less than original, vision.

The paintings operate on two levels: apprehending the entire, all-over image in one glance or perceiving what is often an inner, hovering square or circular image more slowly. While the pictures that tend toward the latter approach come across as more stable and iconic, those nearing an all-over monochrome state have a smoldering, slightly dynamic power all their own. From the faint, white-to-gray cracks and sandy fissures of Untitled 05.13.09 (2009), through the dusty yet concentric radiating spokes of Untitled 07.12.10 (2010) and on to the Rothkoesque, rusty drips of Muted Red (2010), Lee favors not so much pure monochromes as nuanced, barely perceptible gradations of dark to less dark. The viewer is drawn into admiring minute surface effects and this, in turn, can lead to a mesmerizing fixation with surface. The other, more image-centered canvases, such as Untitled 08.03.10 (2010), Untitled 10.24.08 (2008), and Rust (2010), set up, respectively, bursting spatters of black over gray; counterclockwise swirls with a lower white swath; and a pale but spotty orange disk over a creamy white ground. Here the viewer may enter more deeply into shallow space to experience differing layers of painterly activity without ever needing to travel through thick paint. Part of Lee's early achievement is this apparent technical feat. Lee risks making the paintings so quiet, they could disappear. With such an auspicious start, it will be worth watching how he addresses color and composition in his next body of work.