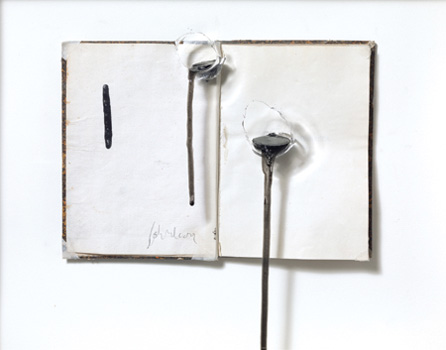 Every now and again one comes across an artist whose vision is incontrovertible and absolutely without measure, and it's as if your breath has no harbor in the body, and words, if you can find any, simply fall away. Jordi Alcaraz, whose show "Traslucido," which, loosely translated, means to show or reveal, has claimed the exhibition space at Jack Rutberg Fine Arts as his own phenomenologically altered space.

Alcaraz hails from Catalonia, and this is his first major exhibition in the United States. Alcaraz, who has been described as a "visual alchemist who takes physical space, objects and ideas and projects them into new dimensions," employs a highly poeticized style, working both in large-scale installations and small, discreet works. Within each of his pieces, Alcaraz engenders a fierce and sometimes complicated relationship to drawing wherein the line becomes nearly a living, breathing organism that continually mutates and disassembles itself in direct relationship to the surrounding space. Alcaraz encompasses these strangely evacuated picture planes with air, wire, and ink, implying a deeper complexity. Each deliberate intrusion becomes a strange unseeing eye, circular though sharply demarcated, as in the wondrous Thieves of Drawing , where the drawing space itself has been excised and invaded, exemplified in a series of near convulsive openings into the Plexiglas atop the image. The drawing, indeed the lines themselves have evaporated, disappeared, stolen perhaps or repossessed. Still other works depict the line as a near alchemical phenomenon, a ghostly presence that can come and go at will as in Alcaraz' piece Painting & Breathing, where the Plexiglas is molded and manipulated to form what appears to be a truncated spinal chord, a single breath, or it could be the place from which the drawing has been born and has subsequently disappeared.

Alcaraz' relationship with language is not only literally represented here in books, the pages of which are blank and yellowed, but also in the implied visual possibilities that language, especially poetry, affords us. In the work Two Poems for example, black paint that references ink pools in two holes in the Plexiglas, imply that language has autonomy, collecting itself into contained units and spilling over. Thus language is unreliable and the "true poetry" exists in the endless possibility of simple discovery.