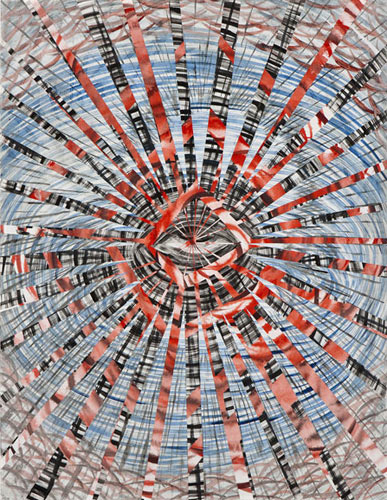 San Francisco artist Andrew Schoultz’s newest work comes at you like an explosion. It’s big, bold, and colorful. It’s also serious, playful, and chaotic. The show features collage and acrylic paintings, monotypes, and large-scale sculpture. Throughout, Schoultz utilizes graphic/illustrative imagery regularly featured in past work as well as his exquisitely detailed line work. In every piece there is more than a lot going on. They work on numerous levels, foremost hovering between representation and abstraction. They are a brightly twisted playground for the eye and the mind, a trip down the rabbit hole with serious social commentary.

Schoultz came out of the graffiti scene; he put up his first tag while he was still in grade school. This street experience is reflected in his gallery work, most obviously in his penchant for large scale. He counter-balances this with innumerable small elements. The play of scale gives the work a great deal of depth and movement.

He also reworks the same images over and over, in the same manner that tags are repeated again and again on the street. For Shoultz, this repetition serves two purposes. It’s a form of storytelling: “In stories,” Schoultz said in a 2006 interview with Fecal Face, “characters reoccur and build themselves. I like the idea of developing a character or an image.” He also notes that by painting the same subject year after year, it slowly changes and finds fresh meaning. Throughout this body of work, we see the medieval horse, the eye of Providence (a graphic eye as appears on the one-dollar bill), tornados, bricks, and buildings askew. They serve as powerful symbols of Schoultz’s explorations: issues of man versus nature, history (and its sad repetition), environmental concerns, and globalization.

Like that of any good storyteller, Schoultz’s narrative does evolve, often to address current events. “Reclamation, Oil, Water,” for instance, is a commentary on the Gulf oil spill. The tornado (loss of control to nature) and eye are present. Schoultz also throws in a few other not so subtle but well placed ideas: the rippling water creates a camouflage pattern (war for oil), and the shimmering silver paint on a structure being transported on the water looks a lot like an oil slick (the true cost of global commerce).

The final crossover from Schoultz’s street work is the audience he addresses: the public. It shows a capacity to appeal to a broad audience, from children to the well-versed art lover.

Not to be overlooked is Schoultz’s use of color, which plays out in several ways. Red, white, and blue figure prominently in several works (a flag reference). And the messages are clear. In the large wall sculpture “Broken Wall (in Three Parts)” the American colors are separated to suggest a country divided or breaking apart. And gold, on bricks no less, figures prominently, especially in the enormous (and self-explanatory) “Brick Wall (Gold).”

Color also contributes to the many ways any given piece can be experienced. “Explosion,” a work made of layer upon layer of collage and innumerable graphics and images, as well as pieces of dollar bills, features numerous accents of different neon colors. From far away, these punchy tones read like a fairly un-modulated color-field painting. Up close, the eye reads color frantically in this wonderfully active work.

In this exhibition we are also privy to two types of work either not before seen, or not common to Schoultz’s oeuvre. New are his acrylic-on-found-antique-metal-plate-print paintings. In these black-and-white pieces, mostly comprised of his “Revisiting Insignificant Moments in History” series, Schoultz paints his own intricately lined iconography over the intricately lined images of the original prints, deftly merging past and present. Schoultz also presents a number of prints, most notably the monotype series “Compound Eye.” Each print features a one solid color, the eye graphic subtly present in a slightly different hue. The eye looks like a fingerprint or the rings of a tree. The series together is a breakdown of all the primary colors present in the show.