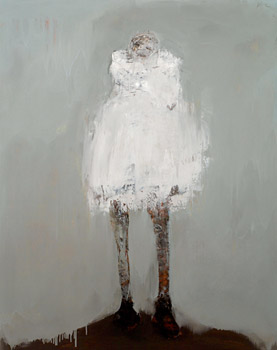 When Sue Greenwood Fine Art first introduced painter Marianne Kolb to intrigued Orange County collectors and critics, acclaim came instantaneously since no one could readily pigeonhole her work. Comparisons to Nathan Olivera come to mind but, when pressed for sources of inspiration, Kolb says that she owes more to Manuel Neri and, more abstractly, Diane Arbus. Life in San Francisco seems to have influenced her less than her formative years in a parochial Swiss village where, she said, a wish to make art was deemed a character flaw. Comparisons to Francis Bacon abound, even though her characters, ranging from rabbis to solitary childlike dancers, exhibit a quieter inner angst. Someone wanted to see you that way today, a depiction of a woman looking as if in throes of despair, typifies many of her females. Clad in a white dress, armless and with skinny dark legs and shapeless feet this figure conveys helplessness and isolation. But, one might also see such a painting as a new "Howl," a cry for transcendence from bourgeois values, force-fed into her while young.

Kolb's mind also seems to be occupied by the vicissitudes of aging. Something has changed is a straight-on, full figure portrayal of a nearly featureless woman wearing a shapeless black skirt and a red shawl whose fringes make one think of blood. She has arms but no hands, and she's cut off at the feet. Yet, the left of her two burned orange legs suggests forward motion, a hint of defiance. The world may look through her but she'll walk all over you. Kolb has also created a few rare portraits, such as Her eyes are very quiet, in which another old woman looks at the viewer through half-closed eyes. Dark skinned (Kolb rarely dwells on externals like race or ethnicity), she is set against a bright colored background, another innovation in this latest body of work. When nobody is watching is another portrait but, nearly devoid of features, it only hints at physicality. Disturbingly ugly, it nonetheless compels. To the enlightenment or distress of her audience, Kolb paints the soul.