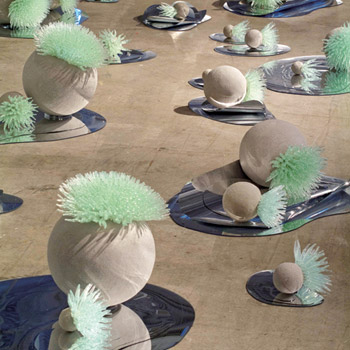 Recently, LAUNCH was launched with a solo show by Meeson Pae Yang. "Accumulations" featured four of her whimsical faux-ecosystem installations, as well as several wall pieces. Her work conjures up organic forms--a flotilla of jellyfish floating in the ocean in Macrospores, sea anemones drifting in colonies at low tide in Geodes--all made up of readily available artificial materials. (OK, one's associations may be different from hers.) She uses cut Mylar, transparent plastic balls, inflatable plastic sacs, plastic tubes, pins and solder--with little attempt to disguise her material. It's quite the opposite of Roxy Paine's Weed Choked Garden (1998), which was recently pulled out of MOCA's permanent collection closet for a show at MOCA Geffen. Paine prodigiously manipulated plastic, polymer and paint to create a hyper-realistic replica of a decaying garden--tomatoes on vines, muddy earth and all. Yang isn't so pessimistic or brooding. Instead, she suggests a kind of hygienic and hybrid future--"hybrid" because sometimes she interjects small amounts of real plant matter in her work. In the past she has used tree bark and various kinds of moss; for the current show, she collected dried sea fan coral and placed small bits of them inside the suspended plastic orbs of Macrospores. It's her little joke, to mix up real and unreal, and to evoke the living from the artificial.

Macrospores consists of 125 globes in four sizes, hanging in space via nylon filament tied to overhead grids. The larger ones have "tentacles" or "tails" made up of cut Mylar dangling from them. The artist likes hanging things--her installations often involve hanging multiple objects from overhead, allowing them to appear suspended in mid-air and to be moved, ever so gently, by air currents. One is transfixed by their sense of weightlessness. Yang also understands how we love order and orderliness; in Entity, a set of 20 molded Plexiglas bubble covers are set on the floor, arranged in rows four across and five down. Each has an LED and glows from within, as if alive.

These are labor-intensive installations; they are also serenely beautiful. Standing in front of or inside them, we dream of a peaceable kingdom made up of pale greens, soft lights, and transparent forms effortlessly drifting. Yang's ability to wrest elegance from materials is her intuitive gift, an elegance culled from both the manipulation of materials and the arrangement of them.