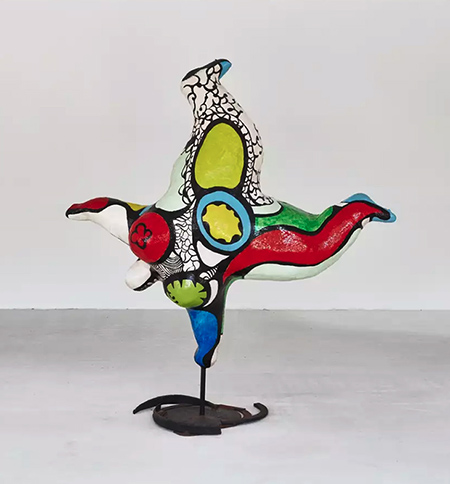 Niki de Saint Phalle (1930-2002) possessed extraordinary gifts and opportunities, along with an upbeat attitude. Born in France to an aristocratic French father and American mother, the bi-lingual woman grew up in Manhattan’s Upper East Side, a few blocks from the Metropolitan Museum of Art, which she considered to be her first source of instruction. De Saint Phalle’s beauty and grace led her to model early in life for “Elle,” “Harper’s Bazaar” and French “Vogue.” She read the existentialists, including Simone de Beauvoir and Jean-Paul Sartre, both of whom addressed personal freedom in their writings. And she was likewise bold, feisty and adventurous in her life and artwork.

However, de Saint Phalle was haunted by a childhood that included intense sexual and emotional abuse. Such mistreatment resulted in a nervous breakdown and hospitalization in her early twenties. During that hospital stay, she began to paint seriously. Her art making quickly evolved into an empathetic, creative activity that expedited her quick recovery. De Saint Phalle pursued her artistry for the next five decades until her death, in part the result of exposure to the resins used to fabricate many of her artworks.

The paintings, sculpture, and assemblage from the 1960s, on which the exhibition focuses, conjoin joy with rage, artistic expertise with primitive energy, all of it infused with vitality and sensuality. Her profound aesthetic sensibilities and equally strong audaciousness propelled de Saint Phalle to recognition in the emerging art worlds of America and Europe. She was the only woman to join the Nouveaux Réalistes, a Paris- and Milan-based avant-garde movement allied with Pop Art. She also knew and worked with some of America’s leading artists of that period, including Ed Kienholz, Jasper Johns and Robert Rauschenberg.

Several art writers have observed that while de Saint Phalle may be one of the most significant female artists of the last century, she has received precious little recognition, especially in this country. This exhibition of 50 works, plus a film of her “Tirs” or live shootings of her paintings, photographs, and an extensive catalog persuasively argues her importance.

The exhibition focuses on the transformative decade (1960-70) in de Saint Phalle’s life, during which she unearthed her life experiences and translated them into a formidable body of work. In particular it explores her two most significant series: the “Tirs” paintings (1960 to 1963) and the exuberant sculptures of women, titled “Nanas.” For dozens of “Tirs” performances enacted here and in Europe, the elegantly attired artist shot her work with a .22 caliber rifle. She, along with invited shooters, aimed at white plaster-covered canvases that contained jars of colorful paint, ink, yogurt, and flammable liquids that exploded upon impact. Her intention, “to make a painting bleed,” was her assault on modern art’s patriarchy and a pointed commentary on the violence in our culture that now feels particularly timely. It was also a personally cathartic act, referencing de Saint Phalle’s father and his sexual exploitation of her. She is quoted in the catalog: “After a shoot-out I felt completely stoned. I became hooked on this macabre yet joyous ritual. It got to the point where I lost control, my heart was pounding during the shoot-outs.”

One of the most extravagant of the “Tirs” is the eight-foot wide “Gorgo in New York” (1962). The black-and-white, four-panel work depicts prehistoric beasts terrorizing domestic scenes in New York. The equally large “Pirodactyl over New York” (1962) sends teenagers on roller skates crashing into Manhattan skyscrapers. Both pieces are described in the catalog as “invoking Hollywood’s infatuation with monsters and sexual innuendo.”

Smaller works from the series titled “Tir Séance, 26 June 1961” and “Grand Tir – Séance de la Galerie J” (both 1961) translate from French as “shooting sessions.” These more abstract pieces acknowledge the influence of Jackson Pollock’s drip paintings: “In discovering [Pollock’s] gesticulated energy of paint on the canvas, I decided to incorporate it into my own paintings … The skies in my paintings would no longer be flat black, they would have drips of white.” The “Tirs” series also references the effects of the recent war on the European landscape and its people, and more narrowly on the destruction of its modernist Avant Garde.

Satiated by the laborious acts of creating the “Tirs” and of shooting them, de Saint Phalle remarked, “I don’t like losing control. It scares me and I hate the idea of being addicted to something — so I gave it up.” Thus in 1964, the artist began creating her more joyous representations of the female body, the “Nanas” (French slang for “girl”). She continued to build variations of these pieces in ever larger sizes and various configurations throughout the rest of her life. Portraying mothers, goddesses, witches, monsters, and a ghostly bride, she first made them with collaged paper and fabric, and later with painted polyester resin, fabric, wire mesh, and collage.

Jill Dawsey, PhD, Senior Curator of the exhibition, commented: “With their rambunctious life force, the Nanas became a vehicle for the artist’s exploration of women’s freedom and mobility in the public realm.” De Saint Phalle’s larger than life sculptural pieces, many with enormous limbs, breasts and bellies, strike fearless, athletic poses. They were dramatic counterpoints to the skinny female prototype of commercial and popular culture. These sculptures embodied the artist’s desire to make women appear more significant than men, and anticipated issues explored by feminist artists in subsequent decades. As art historian Amelia Jones concludes in the catalog, “NSP’s work made future feminist art and culture possible.” Yet in a 1993 statement to the “New York Times,” de Saint Phalle counters: “I have always refused to be in a feminist show because I do not see the world in that way. I’m a feminist in that I believe passionately in equal wages, equal opportunities and so on … I like the European game of flirting ...”

Among the “Nanas” is the 101-inch tall “Madame, or Green Nana with Black Bag” (1968). This enormous Amazonian figure, demurely clothed in a green print dress with stockings, black pumps and bag, pokes fun at the proper attire that women of the artist's mother’s generation wore on shopping trips and museum visits. “Seated Nana” (1965) is an outrageously corpulent figure, seated with legs apart, revealing her private parts and huge boobs, covered with colorful hearts, paisley designs, fruit and flowers. The brightly colored “Bathing Beauty” (1967) balances on one hand, showing off her athletic prowess.

Amelia Jones also writes, “It was NSP herself who used the terms ‘wild maid,’ ‘wild soul,’ and ‘a wild, wild weed’ … she called them forth to describe herself in her autobiography ‘Traces.’” These references evoke the words of Jungian analyst Clarissa Pinkola Estés, Ph.D. in her 1992 book, “Women Who Run with the Wolves,” which aptly describe de Saint Phalle as both woman and artist: “Wildlife and the Wild Woman are both endangered species … Healthy wolves and healthy women share certain psychic characteristics, keen sensing, playful spirit, and a heightened capacity for devotion. Wolves and women are relational by nature, inquiring, possessed of great endurance and strength.”