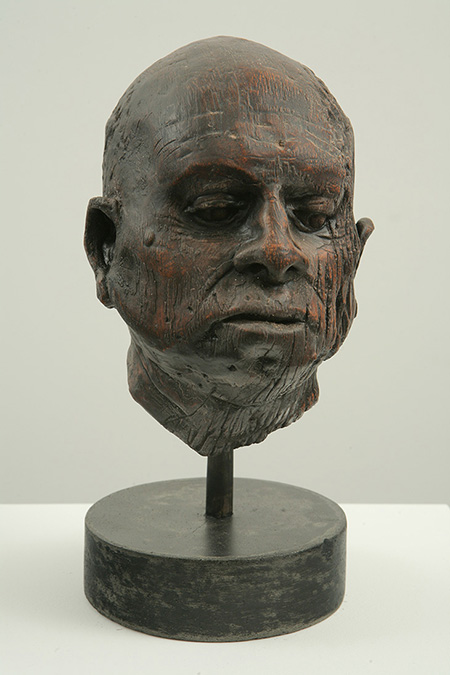 At a time of rowdy marches, outraged protests and growing awareness of systemic racism within the United States, artists are increasingly being recognized as anticipating many of these themes: anger at inequities, not to mention violence perpetrated against citizens of color and non-violent demonstrators. Paul Metivier is such an artist. For the past decade, the Renton, WA resident has been creating realistic wall-mounted effigies of individuals who are expressing inner rage, often with eyes closed. In a series of installations in Seattle at Gallery IMA and in Auburn, WA at Green River College where Metivier teaches, the “Processions” (2009-2020) literally advance from the gallery wall, torsos and busts coming toward us. Their silent defiance of authority and existing inequalities is bold, activating the white cube space with considerable power.

Metivier’s background has fired his conscience and generated his unceasing concerns about African-American men being threatened and murdered by law enforcement officers. Descended from French-Canadians who arrived in the U.S. in 1904, the Metiviers may have been “métis,” mixed-race indigenous people who intermarried with French colonists as early as the 17th century. In the mid-19th-century, Metivier’s mother’s family were victims of forced relocation of Cherokee and Chickasaw tribes from North Carolina to Oklahoma. Robbed of their land, they were subjected to decades of discrimination, violence and displacement. Other family members include African-Americans, Mexicans and Caucasians. Seeing social crises from a 360-degree viewpoint in a sense, Metivier identifies with the suffering of African-Americans and other people of color because he is one of them, officially recorded on the tribal rolls in Oklahoma.

Inspired by his mother, the painter Patricia Mitchell Metivier, who graduated from college after raising eight children, Metivier studied ceramics first at Orange Coast Community College before transferring to California State University at Long Beach, where he concentrated on Native American studies and was introduced to mold making by noted artist Tony Marsh. At the University of Washington (MFA, 2001), he was encouraged by professors Akio Takamori (who specialized in images of Japanese-Americans and other global immigrants) and Doug Jeck, whose full-frontal life-size male nude sculptures were as scarred and embattled as Metivier’s would become.

Besides exhibiting regularly in clay-world group shows in such venues as Texas Tech U. and Green River (where he began teaching in 2003), Metivier delved deeply into his heritage, creating male images and effigies of mixed-race individuals, stained dark brown, orange and black. Often with eyes closed, but with foreheads bulging with tension, the partial figures were also seen in group exhibitions in Long Beach, Bellevue, WA, and Lincoln, CA.

After a solo debut at Berozkina Gallery in Kirkland, WA, in 2005, the sculptor, now 53, began massing the heads and torsos into wall-mounted “Processions,” gatherings emerging from the wall to confront the gallery viewer. Their appearance was defiant and uncannily alive. In groups as large as 15, irregularly stacked and positioned on the wall, the “Processionists” represent varied people of color as well as varying facial expressions, emotions ranging from silent defiance to cries of rage. As the artist recalled of his own childhood memories of corrupt police in southern California, “In my old neighborhood, cops were not welcome because we did not see them as help. . . or as helpers. . . we saw them as antagonists of any situation.”

In addition to the ensconced busts, free-standing heads on metal rods, such as the “Henchmen” (2009) and the “Neophytes” (2010), uncomfortably read as severed heads on posts, a familiar public sight in medieval Europe. Using an unusual mix called “terra cotta paper clay,” Metivier is able to form while giving the effect of deep gouging and carving. Wood-grain effects also mimic earlier humble materials of oppressed peoples. With shaved heads, clawed cheeks, and downcast eyes, these series are less defiant, more vulnerable, having been brutally acted upon. They represent the extreme low-point of victimhood: helpless, violated young men, pinned to a post, and appearing to be decapitated with ragged, bloody necks and shoulders. Apart from the dark stains, color is avoided, accentuating a tombstone, memorial look.

Three other works are typical of the varying compositions the artist has employed to convey his silent defiance. Clustered together rather than spaced separately, “The Procession” (2015) crams 16 male heads into another bulging confrontation. With and without hats, the men frown and cringe together and look out towards the viewer. In “The Kindred #3” (2019), a young man, a middle-aged man and an old man with a beard and an Afro haircut made of barbed-wire, simulate three generations, gazing away from each other, but tied by blood and shared experiences of suffering and discrimination. “My Son, My Executioner” (2019) ends our examination on an ambiguous note. A wooden chair back is jerry-rigged to act as a picture-portrait frame for a single figure of carved clay. Antique-looking but with a thin stream of red-orange blood streaming down his cheek, we do not know the cause or the outcome, only that the circumstances could have been avoided in a culture where such violence is available only for Metivier’s elegies of explosive anger and quiet defiance.