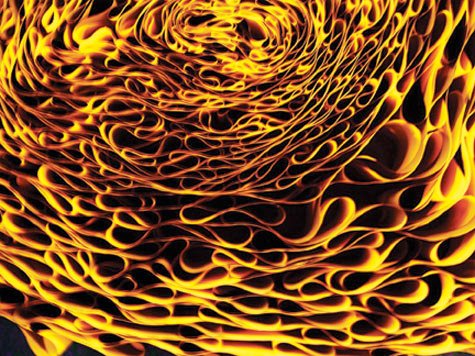 Irit Batsry’s multi-channel video installation Beach at Nightfall (2008) depicts fire-dancers and their audience at Tel Aviv’s famed Drummers’ (or Drums) Beach, all participating in a regular Friday night moon-tribe kind of Sabbath ritual at a famed local gathering place, for a party with marked spiritual and tribal dimensions. Two of the three videos are projected using distorted modifications that rakes them across the gallery walls, converging and overlapping their sloping images. Through the operations of the installation, their views of the landscape (one the sea lapping at the rocky shore, the other the beachfront buildings at the town’s edge) are enlarged to the verge of disintegration. The arrangement creates an immersive environment, with the third, smaller video nestled into the midst of the backdrop they provide. On the walls, the light’s spread and texture gives the impression of fog and danger such as in an old Hitchcock movie; and as in Hitchcock’s scenes of murder, the action in these videos unfolds mainly in silhouette. The accompanying audio is drum-based rhythms, exotic, mesmerizing, and visceral; and its off-screen source suggests an underground theatrical event, or a spied-upon rite—an effect heightened by the disorientation of the saturated environment.

At the center of the illusion, the small but dense video component showing the fire-dancing itself shoots straight to the eye unleashing adrenaline, a shock of dense color nestled within the chimerical, suffused atmosphere of the overall installation, exactly as a fire pit on a beach would appear at night. The footage captures motions that look like frozen brushstrokes of light, lending a sort of magic to the proceedings entirely at home in the emotional and optical landscape the artist engineers. The shifts in scale and the ambiguity of actions work in concert with the viewers’ own movements to push them further into the real and pictorial space, challenging the usual hierarchy of perception, representation, documentary, and fiction; and creating alternative avenues to access truth, forging an interpretive documentary and a bittersweet meditation on the endurance and evolution of public ritual.