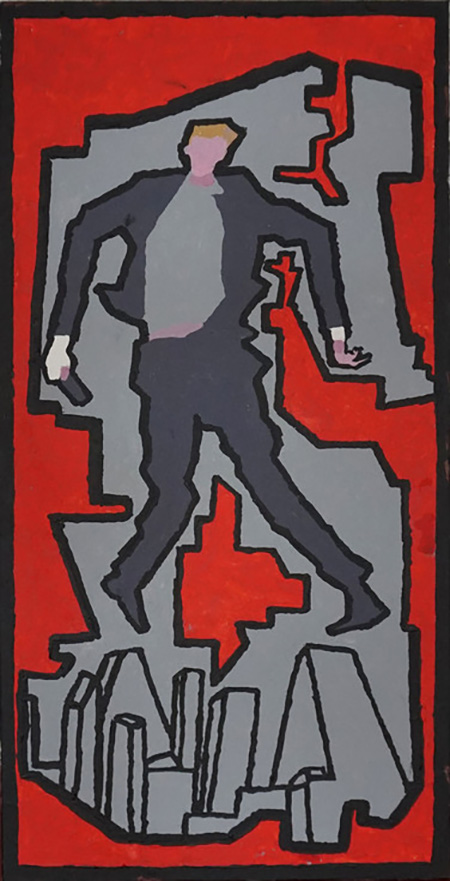 British pop artist Derek Boshier has deep ties to Houston. After joining the faculty of University of Houston in 1980 and regularly exhibiting in various Houston venues for more than 20 years, he relocated to Los Angeles. This show spans the last 15 years, roughly Boshier’s time in Los Angeles since leaving Houston.

“Kings on Road” is one of seven paintings from 2013 contrasting dual images that comment on popular culture or politically charged events. “Kings” refers to a major street in London associated with the mod culture of the 1960s and the punk culture of the 1970s. The image references fashion icons such as Vivienne Westwood and Mary Quant. In this series, the canvases are divided by a diagonal line; on the right, Boshier paints these photographs in white, black and gray, while on the left, he presents a bright caricature inspired by the subject matter. In “Lee Harvey Oswald,” the photograph shows Jack Ruby shooting Oswald in the basement of Dallas police headquarters, and on the left, a tiny superhero figure punches Oswald violently in the face. In “Saigon,” Boshier uses photojournalist Eddie Adams’ memorable 1968 photograph of the execution of a Viet Cong prisoner at close range, while on the left he paints two hands holding revolvers against a bright red background. “Kent State” juxtaposes John Paul Filo’s 1970 image of a young student crying next to a classmate’s body with two sneering sadistic cops.

Boshier also revisits his famous cover design for David Bowie’s album with the Clash, “The Lodger” (1979), for which he and Bowie collaborated with photographer Brian Duffy. Bowie was laid on a metal support and pressed beneath a plate of glass to create the illusion that he has a broken nose and appears to be falling. In Boshier’s 2016 “David Bowie (The Lodger)” the familiar image seems to be electrified as it hovers above the skyline of Los Angeles.

The largest painting in the show, titled “Mexico,” juxtaposes florescent reds, oranges, and blues against a grisaille background. The colorful images depict stereotypical images of Mexico — mariachis, masks, serapes and cactus — floating over a monochromatic background of gruesome images of the dead and dying. There are machine guns, firing squads and hangings. Comments on politics and our current state of affairs always seem to find a place in Boshier’s work.

The world of celebrity continues to pique Boshier’s interest, as the most recent series of “Ghosts of Houston” demonstrates. Consisting of ink drawings on paper of well-known deceased Houstonians — including artists Dick Wray and Casey Williams, writers Donald Barthelme and Molly Ivins, curator Walter Hopps and uber-collector Dominque de Menil — each portrait utilizes the same background photograph, a brick street in Freedman Town. Located near downtown, it is Houston’s oldest African-American community. The figures, posed standing in the middle of the street, are painted in black ink, their faces rendered in a loose comic-book character style. The “Ghosts” of the cultural elite are provocatively joined to anonymous presence of the residents of Freedman Town.

Now in his early 80s, Boshier has spent his career blurring the distinction between high and low art ever since his student days at the Royal College of Art in London in the early 1960s with fellow students David Hockney, Allen Jones, R.B. Kitaj and others in who would become associated with the British Pop Art movement. Boshier stopped painting in the ‘70s and turned to other media, including drawing, printmaking, film, writing, sculpture, installation and photography. His aesthetic approach remains catholic, blending pop art, comic book style and film imagery. The current show conveys the effect of the thousands of images that bombard us daily and the impact of digital technology on the individual. What we get is the product of Boshier’s acerbic wit, engaged content and distinctive style.