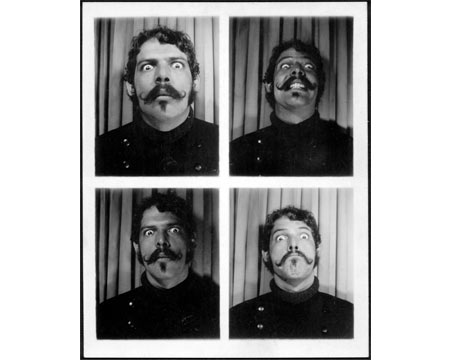 It is noticeably strange that a 50-year retrospective of prominent, postmodern Mexican artist Felipe Ehrenberg would be titled "Manchuria: Peripheral Vision." Why Manchuria? As Fernando Llanos, the exhibition curator, explains it: "Manchuria is a land difficult to locate, semi-unknown, peripheral, and without defined borders." Ehrenberg's work is certainly that. Visitors through this particular "Manchuria" travel  through wild uncharted territory - a journey that explores the creative imagination of Mexico's most rebellious, postmodern artist - without boundaries, limits, or clear definition.

Proclaiming himself a "neologist" (one who invents new words, new concepts, new forms), from Ehrenberg’s point of view art empowers the viewer into a dialogue about "life as art; art as life." This assessment of the artist's role as an individual, and his relationship to society, is at the root of everything he creates. That may sound like a "been there/ done that" re-do of Modernist philosophy, but Ehrenberg takes it one step further. By blurring the boundaries of every form of visual art, music, written word, and performance (live, video, or on film) and by daring to be experimental, subversive, unorthodox, and anarchic in his methodology, Ehrenberg is out to dismantle every staid institutional structure possible. Especially the exclusive art market controlled by a financial elite.

Organized in 2008 by the Museo de Arte Moderno in Mexico City, this monumental, 200-piece survey is the first major exhibition of Ehrenberg's work to be presented in the United States. When visitors enter the museum, they walk past a long black and white mural, precisely the art form for which Mexico is acclaimed around the world. But this mural is not a boldly painted fresco, but rather thousands of sheets of 8 X 11 inch paper that have been photocopied and taped to the wall.

That's your first clue to the non-linear, non-chronological, multifaceted lay-out of this mind-bending, in-your-face exhibit. Which prompts me to repeat what curator Llanos said before he led a walk- through of the exhibit on opening day. "Three years in the making, 'Manchuria' is so new, so innovative, so unfamiliar to the public, it needs interpretation. Like Shakespeare, Mozart, jazz scores, the Mona Lisa, Dada and Fluxus, Ehrenberg should be evaluated by the sensibilities of each individual."

In a parallel sense, "Manchuria" is a chronology of the artist's life and time. A random search finds diagrams of his parent's home  in Michoacán; a 1959 drawing he made as a 13-year-old schoolboy in  Germany; photographs of the dark-haired, mustachioed artist at various stages of his rebellious, peripatetic life; outrageous letters to a prominent London newspaper about "A Date with Fate at the Tate" (his first conceptual project); and live video footage of a city-wide garbage strike that devastated London.

There are also examples of the artist's printmaking skills (he studied with Mexican masters), art books and political tracts, neo-Dada and Fluxus drawings, pages from comic books, titillating photographs from cheap tabloid publications, and a bilingual survival guide for artists called "The Art of Living from Art."

During the turbulent sixties, Ehrenberg was among the artists and intellectuals who fled the country after 300 students and laborers were massacred in Mexico City by federal soldiers. Settling in London, his home for many years, he and David Mayor co-founded "Beau Gest," an  independent artists' press that aligned itself with the Fluxus movement. A case of rubber-stamp "Beau Gest" imagery is included in the show.

After leaving England, Ehrenberg traveled to the United States, where he earned a Guggenheim Fellowship, followed by a series of lectures on "Art and Politics" at the Art Institute of Chicago. Ten years later he received a Fulbright Lecture Award; and by 1990 he was artist-in-residence at Nexus Press in Atlanta, Georgia where he  published "Codex Aeroscriptus Ehrenbergensis" (his anthology on  stencil-based art). Here in California, the self-styled neologist created public art installations for "InSite '94" and "InSite '97" at the San Diego/Tijuana border. Then from 1993-95, he lived in Los Angeles, working at Self-Help Graphics and performing at Highways. His  subjects are always social, cultural, and political issues that revolve around multiculturalism.

The footprints of his labyrinthine journey between 1967-2008 are scattered throughout the museum. When one considers the role that Ehrenberg played in Mexico, Europe, and the United States during the last half of the 20th-Century, it's incredible that an extensive exhibit of this kind did not take place before now. This visit "Manchuria" and experience Ehrenberg's substantial contribution to contemporary culture and history is more than worth the wait.