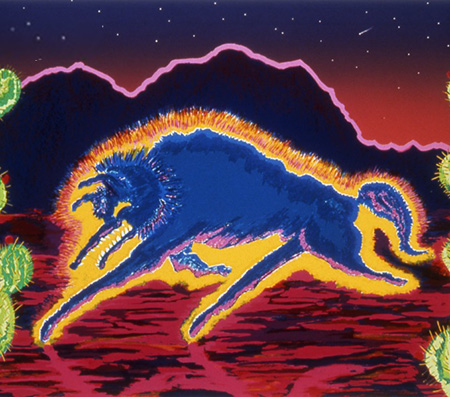 “Self-Help Graphics, 1983-1991” traces the fresh role of Latino printmaking in East Los Angeles under the aegis of one of the period’s most unique alternative art spaces. Electric color heavy with symbolism and expressive rendering are packed into this tight selection of 16 prints. Subject matter ranges from Gilbert Luján’s “Magulandia” self-derived fantasyland to a celebratory Anthony Quinn in Eloy Torrez’ “The Pope of Broadway.” The show is rooted in the historically important role of printmaking, particularly screen printing, in the advancement of the L.A. Chicano civil rights movement that exploded in the 1960s. The artwork was an extension of this self-defining movement.

Self-Help Graphics opened its original studio and gallery in Boyle Heights in 1972, lead by Carlos Bueno, Antonio Ibañez and Sister Karen Boccalero. Boccalero was an artist and nun of the Sisters of St. Francis of Penance order who served as Director until her death in 1997, and was a key force in the encouragement and education of the creative impulse of many young artists from the local community. That may not sound at all strange now, but then it was a radical alternative for kids whose families often could not afford the cost of higher education. In 1982, Self-Help initiated its Screenprint Atelier Program, giving artists access to a master printer, materials and silkscreen studio. This gift to the community enabled artists to develop their craft, access to which many of the artists seen here parlayed into national and international reputations.

In 1992, the Laguna Art Museum (LAM) acquired 170 prints created by 90 of the Los Angeles-based artists who worked with Self-Help. With that acquisition, LAM owned the largest collection of Chicano prints held by any museum. In 1995, LAM mounted a major exhibition, titled “Across the Street,” of these prints. The exhibition catalog explains that the geographical location of the nascent Chicano movement allowed for the development of art, “that had more in common with the community that supported and surrounded it than with the rarified language of the generic art world.”

The current exhibition explores the range and breadth of Chicano art a generation ago. Luján’s “Cruising Turtle Island” (1986) features a wildly painted car, traveling through a tropical, urban landscape, with a dog-person in the lower right corner looking on. This depiction of the artist’s imaginary Magulandia environment (from his nickname, “Magu”) is based on his research into Mesoamerican iconography and architecture. Frank Romero’s “L.A, Landscape” (1986) portrays the sweep of East Los Angeles life and environs in a narrative image. A sedan travels across a freeway, while the surrounding landscape is keyed up in bright red, a color that the artist often employs. The one recognizable structure is L.A.’s 1930s style City Hall, while a row of buildings, background foliage and pottery are depicted more abstractly. (Both Luján and Romero were founding members of the “Los Four” Chicano artists’ collective, begun in the 1970s at UC Irvine.)

In Torrez’ “The Pope of Broadway” (1984) actor Anthony Quinn, a native of Mexico demonstrates a “Zorba the Greek” style dance, Quinn’s signature role. Another dancing figure, “Río, Por No Llorar” (1988), by Alex Donis, is a colorful portrait of a blissed out woman, clad in decorative garb and jewelry, wearing an enormous head-dress with fruit and a can of coffee. This Carmen Miranda look-alike is created with exotic Chicano aspects. Patssi Valdez’s “The Dressing Table” (1988) includes a riot of accessories, including jewelry, perfume bottles and a black faced figure, printed in mostly in neon blues and oranges. Ricardo Gonsalves’” Don Juan’s Got the Blues” (1988) illustrates an electrified blue coyote in a desert setting, attacking its prey, while surrounded by cacti and purple mountains that echo the shape of the animal. The signature work in this magnetic exhibition, as it was in LAM’s 1995 show is “Hero” (1991) by José Lozano. It features a close-up of a large, haunting black mask with Mayan inspired designs.