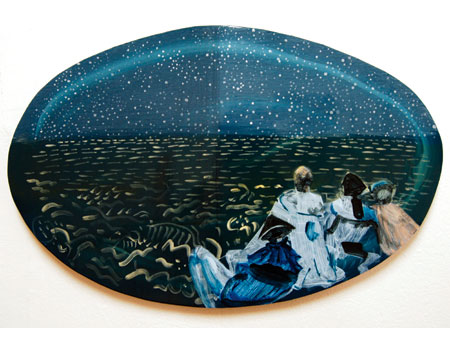 Keer Tanchak's painterly versions of Rococo arcadias are impossible to see today outside the context of financial meltdown and oil-well blowout; those bewigged, amorous aristocrats--eating, drinking and being merry, as if there were no tomorrow--who else but our own Masters of the Universe? Tanchak may be targeting the let-them-eat-cake mindset (as Barbara Kruger and Haim Steinbach do); in my opinion, however, she repaints Fragonard and Watteau, probably from projections, not just to dragoon them into satirizing our "divine decadence," but because their works remain beautiful and alluring. While Tanchak sees "parallels between 18th-century France and now," "fresh pictures and not ... obvious statements" are her primary goal. These small works on paper and reflective aluminum panel (suggesting daguerreotypes) are cut into irregular shapes (suggesting defective cameos, spinning blades, distorting mirrors, and pools of water), and they celebrate painting as craft, discipline and artifact. Oscillating between sociopolitics and beauty, past and present, high and low, they keep us watching--knitting and unraveling our interpretations.

Tanchak's art-history Ancien Regime is pervaded by modernity. The titles and images sometimes conflict, generating sparks, but also light: Wild Child's title may allude to Truffaut's film about the humanization of a French feral boy, but the painting depicts the precocious young Jesus taken to the Temple; War Mother depicts the Madonna in the stable, a refugee with a doomed baby. In a more contemporary hedonistic vein, Hey, Hot Boy and First Blue Moon depict canoodling couples, youngsters merged beneath a vermilion sky in the former, and more mature Romantic ami et amie reposing amid ruffles and flounces in the latter. Another blue-tinted nocturne, Equal Gaze, depicts two couples watching the waves beneath a starry sky; in yet another, Choosing Galliano, a masked lady sits beside a fountain awaiting male attention (are those BB logos on her ball gown?). Other images are more ambiguous, despite their visual delights: Zombie Fete, with its trio of hovering females; Sweet-Pants, with its Bacon-pink nude in bed with her dog; and Hovercraft, with its commedia dell'arte puppets, suspended behind half-opened curtains.