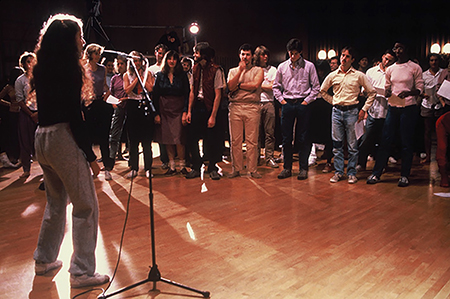 In addition to being part of the first wave of conceptual art (New York version), Adrian Piper evolved to encompass interactive performance, making charged socio-political work, and intermittently creating poetic images and objects throughout. She’s the quintessential institutional artist, to the extent that her work tends to defy market collectability, though it’s widely valued by museums for its social poignancy and its ability to reflect the zeitgeist of virtually every decade of her long career.

As a sign of “Concepts and Intuitions, 1965-2016” comprehensiveness, as well as Piper’s ability to make quality, relevant work from early in her career, the show begins with LSD-driven drawings and paintings from when she was still a teenager. A series of fine-point pen drawings of Hans Bellmer-like, mildly macabre and classically weird figurations give way in the subsequent galleries to her extensive explorations into the ontology of objects. They bring to mind another original conceptualist, Douglas Huebler, though her immediate peer group included Laurence Weiner, who has remained one of the most committed to that genre. As she was producing her ontological objects, austere in their dryness, Piper began doing performances both in venues and in public that are documented here: walking around the legendary club Max’s Kansas City with a blindfold, nose clip, gloves and earplugs; stuffing her mouth with a bright towel and riding the bus; and walking the Manhattan streets with a “Wet Paint” sign across her front and back.

As substantial and potent as Piper’s other bodies of work have been, there’s something about these interactive works that resonate deeply and with nuanced complexity. One of these, “Funk Lessons,” represented in the exhibition by a 15-minute screen projection from a group performance at U.C. Berkeley in 1983, has Piper teaching a diverse crowd how to dance to funk, a definitive musical genre in contemporary African-American culture and one primed for turning into a “full-fledged dance party,” as the museum dogmatic puts it. Amid the openness of the willing crowd and a celebratory vibe, Piper is heard being interviewed about the performance, pointing out that white bands — in this case the Talking Heads — rose to fame under the influence of funk progenitors Parliament Funkadelic, while Bootsy Collins (one of Parliament’s key players) remained in relative obscurity.

Later in the ‘80s, Piper produced a trio of business cards, “My Calling (Card),” another milestone in her oeuvre. “Card #1,” subtitled “Reactive Guerilla Performance for Dinner and Cocktail Parties,” is printed on light brown card stock and reads as follows: “Dear Friend, I am black. I am sure you did not realize this when you made/laughed at/agreed with that racist remark. In the past, I have attempted to alert white people to my racial identity in advance. Unfortunately, this invariably causes them to react to me as pushy, manipulative or socially inappropriate. Therefore, my policy is to assume that white people do not make these remarks, even when they believe there are no black people present, and to distribute this card when they do. I regret any discomfort my presence is causing you, just as I am sure you regret the discomfort your racism is causing me.”

More than 30 years after its creation, the poetry and timelessness of the message retains its force, though alongside the kind of racism that has resurfaced of late within the white nationalist set it’s rhetoric is relatively subtle.

“Card #2,” also from 1986, expresses the cardholder’s request to be left alone/not picked up, while “Card #3” urges the recipient, “DO NOT TOUCH, TAP, PAT, STROKE, PROD, PINCH, POKE, GROPE OR GRAB ME.” Produced in 2012, Piper anticipated #MeToo by six years. And if that isn’t enough prescience, back in 1975 Piper created a six-part piece called “I/You/(Us),” which, while stylistically dated (thanks to its employment of Photostat reproduction), bears another feminist sentiment that has now become iconic. Featuring a young and inexpressive Piper in the lower left corner, a cartoon bubble floating above her directs her imagined conversant to provide her with (presumably) his full attention. One of them reads, “Take Care That You Do Not Interrupt Me Before I Am Finished For That Will Indicate To Me That You Were Not Paying Careful Attention To What I Was Saying.” It’s a sentiment that implies what would later be termed “mansplaining,” if by proxy.

As “Funk Lessons” (audibly) predominates the first half of this retrospective, “Adrian Moves to Berlin,” from 2007, serves as the show’s big sendoff. Another wall projection, it shows Piper dancing by herself in a public square as bicyclists and the odd car pass by in the background. She’s essentially performing audience-free. The piece feels both like a bookend to the significant performative aspects of her career, as well as — cued by the work’s title — a solo celebration. Piper leaves behind the limitations and virtually unsolvable social injustices of the U.S. to land in the European capital for artists and art intellectuals, as well as into a new and presumably more enlightened community (this was the Bush era, FYI). It even feels as though, again through implication, Piper’s settling in Berlin — the genius in exile — has secured her canonization. Indeed, many works in “Concepts and Intuitions,” including this video, are from the Collection Adrian Piper Research Archive Foundation Berlin.