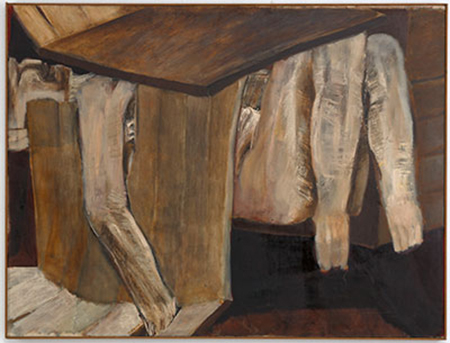 Purportedly three years in the planning, the three-gallery survey of veteran Pacific Northwest painter Michael C. Spafford brings together dozens of paintings and prints, a hardbound catalogue, beautiful installations and lighting. But why wasn’t it all in an art museum? (More on that later). Spafford found his métier in Classical Greek myth early on, and has spent his entire career (he is now 82) creating abstracted versions of many of the old myths. These are a scaffolding for painterly abstractions, Spafford’s real strengths in form, color, texture and surface.

A graduate of Pomona College where he was a student of Peter Selz, Spafford went on to study art history at Harvard. An encounter with Mark Rothko in New York at a party confirmed his decision to abandon art history for painting and spurred him to find a subject that would lend itself to painterly attack without obtruding into clumsy narrative. As a result, numerous myths of ancient Greece provided fodder for his artistic development. Each myth would be identifiable from highly reductive treatment, right down to specific events such as the rape of Europa, the birth of Athena, Leda and the swan, Cronus devouring his children and many others.

Before arriving in Seattle, the artist spent three years in Mexico, painting and studying Mesoamerican myths and ruins, as well as the monumental murals of Rivera, Orozco and Siqueiros. Following their blends of contemporary and ancient, Spafford contemporized Greek myths with his vigorous gesture, high-contrast composition, and aggressive retelling of the often violent tales. The approach quickly attracted acclaim and attention (group shows in New York, Los Angeles, and Mexico City), but it was not until the 1980s that his art came into full stride, when he was invited to complete a double-mural on the theme of the labors of Hercules for the Washington State House of Representatives. Building on the enormous scale of the murals, Spafford was able to stretch his subsequent, gallery-size paintings into tableaux of considerable grandeur, comparable to the Neo-Classical sense of a modern identification with the archaic. Bodies about to be raped are condensed; centaurs are inscribed by legs and hooves; serpents devouring Laocoön and his sons are large gray tubes; and the Minotaur is a nude male with an enormous member and bull headdress. Their brilliant facture redeemed the perhaps tired, familiar subject matter, increasingly out of fashion due to its post-modern association with the culture of “dead white males.”

Terrifyingly alive although often headless or without any facial features, Spafford’s epic heroes are captured in the box of the rectangle, struggling against human and animal adversaries, and brought alive by a rigidly narrow palette — black, white, red, yellow, blue and variations thereof.

The collaborating dealers have borrowed everything from the artist’s collection, so we see none of the works that entered important public and private collections, which is a shame. Nevertheless, there are abundant pleasures to behold. We see the Leon Golub-influenced early work, “Origin Myth 9” (1961). The two artists were introduced at Pomona by Selz, who commented recently on his former student: “Spafford saw that figurative art could not be killed by formalism and that he could confront the trend of the time.” Experiments with canvas shape, canvas collage, suspended sections, cut-outs and cantilevered areas, as in “Bellerophon” (1968), “Leda” (1968) and “Perseus & Medusa” (1977), expanded the artist’s power over every aspect of the art of painting. Extensive series of sequential prints, woodcuts, and silkscreens, reiterating themes within the two dimensions of printmaking, are all seen in depth at Davidson.

Kucera and Braseth focus on major works, including several masterpieces of considerable scope and size. These are what hearten the long-term viewer of Spafford’s art and will introduce newcomers to its visceral, dynamic character. “Death of Chimera” (1984) at Kucera is an 18-ft.-wide triptych complete with abstracted Medusa, teeth and wings. At Woodside/Braseth, “Birth of Athena” (2016) is the artist at the height of his powers, nearly 7 ft. tall, with the goddess emerging—as yellow legs—from Zeus’ cleaved-in head.

Spafford’s career has been a mixture of heralding and hate. Because of his mistaken choice of the labors of Hercules for the state legislature building in 1982, he was accused of obscenity by legislators who were soon echoed by provincial media. They were removed and relocated to the Corbet Theatre at Centralia College in Centralia, Washington in 2003. Art museum surveys followed as consolation prizes, but now, in the age of sexual harassment exposés and a renewed puritanism, the frank sexuality, anatomy and violence have found a more hospitable and tolerant home in Pioneer Square.