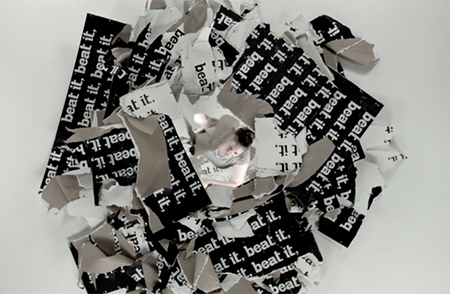 When viewing the central video piece, “Beat It” in New York-based artist Kate Gilmore’s exhibition titled “Morning Rage,” it takes a while to understand what we’re looking at. Through a circle in a white ground, we watch broken pieces of printed board crashing down, accompanied by the sounds of the artist demolishing something out of our eyesight. As the 15-minute film progresses, we see Gilmore enter this circular frame among the fragments. Eventually, she begins to push these fragments up through the circle, making it suddenly clear that we’ve been viewing the action through a hole in the ceiling of a structure that’s being destroyed. The artist’s process is layered and allegorical, becoming more than mere documentation.

Gilmore is known for performances and gestures like these, in which there are components of destruction as a creative force, and a struggle is exerted via a woman’s body. The tasks Gilmore presents herself with are often messy and physically taxing, but not altogether impossible, like pushing a series of leaky, paint-filled baskets up an incline as in “A Tisket A Tasket.” These gestures run the gamut from unnecessary to almost preposterous. And, with a reachable end goal, it’s not Gilmore’s suffering that characterizes the aspect of endurance in these performances, it’s her determination. In “Beat It,” we watch as the artist wrecks her own sculpture, then literally picks up all the pieces.

“Morning Rage” is also populated by a series of minimalist aluminum cubes called “Bend Motherfucker,” where each component has clearly been repeatedly clobbered by a blunt object. “Bend Motherfucker” is the visual inverse of “Beat It:” the latter is a process without its sculpture; the former a sculpture without its process. Here, Gilmore’s mastery of material and process comes full circle. With “Bend Motherfucker,” there’s no need for documentation; the dents, hallows and scratches are evidence enough for us to visualize what’s happened.

With its emphasis on aggression, destruction and drudgery, “Morning Rage” is angry at its core. Gilmore’s works speak not only to the frustrations of art-making, both literally and metaphorically, but they also speak to a wider, contemporary sensibility. Of late, most of us are likely sharing the experience of waking up to a host of infuriating news in our Twitter feeds and morning podcasts. The manner in which Gilmore welcomes in and harnesses outright vitriol serves as a powerful reminder that such emotion need not be wholly negative, that it could be a natural and necessary part of overcoming whatever stands in our way.