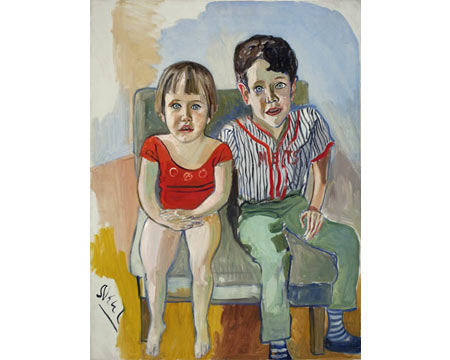 One line of reasoning is that “the art is the art,” which is to say that it ought not matter that Alice Neel was one of few women painters tenaciously practicing when gifted artists like Elaine de Kooning and Lee Krasner were — by acquiescence or cultural pressure — conceding to roles as archivist or muse to male partners.

As this argument goes, one stands in front of a work and it should not matter that Neel lost an infant daughter to illness, then had another taken by her husband to Cuba, then attempted suicide, then moved to Spanish Harlem to be closer to things a tad more 'real' than the silver ‘n black circle of Mary Boone.

It ought not matter that she plied her incisive representations of sitters — the everyday and the luminary — with equal attention and a rather amazing sureness of purpose at a time when abstraction and conceptualism were deemed advanced and realism was seen as retrograde. Neel worked in obscurity through all this. And as the somewhat arbitrary cycles of artworld fame came eventually to note her gifts late in life, nothing changed — she was no less brutally honest and compassionately accurate in her now signature figurative records of herself and those around her.

Without a doubt, Neel observes with an honesty that makes you wince; even when she's ostensibly recording the 'innocence' (read: utterly powerless terror) of childhood in the stunning “Abe’s Grandchildren” (1964).

This show spans Neel’s career up to her death in 1984. Tired PR clichés about portraitists looking into the sitter's depths notwithstanding, far more compelling is how she gets you to such places. Therein lies the mastery. More than any realist of her generation, Neel honors Cezanne in the way she suggests anatomy from the architecture of paint rather than through perspective or logic. There is this tight fusion between the plastic and formal reality of an art work, and the equally undeniable accuracy and depth of the view the artist offers us of us, of our world, our place and predicament in it.

Everything Neel accomplishes is vehiculated by the expertness of form; by the way that form clarifies or reveals in both subtle and shocking ways the structural within the emotive, the phenomenological hinged to the symbolic. In “Richard Gibbs” (1968), there is no anatomical logic to the figure. The well drafted head is too large and sinks into a nonexistent, highly abstracted torso that’s really not more than a visual bridge to the subject: massive fore-fronted and ambulatory shapes loosely describing Gibbs’ hands and feet. In these you read a desire for flight or conveyance in a guy whose will seems frozen where he sits. Such is the avoidance Neel herself might have felt about life and fame.

Neel’s image of “Ann Sutherland Harris and Neil” (1978) has the art historian equivocally holding her toddler. It is the very image of a driven careerist, and a narrative of that old battle between nature and culture. One particularly stunning painting, “Stewart Mott” (1961), depicts a guy who ought to be free-wheeling, dressed as he is in kilts, sporting a beard and an impish grin. The rod-like, Cezanne-esque arms and legs, too short and graphic to be mere ‘realism’ lock in a static, by the book composition that ultimately says more about Mott than his hip façade or any bio might.

We might indeed leave the messy life stuff out and still marvel at this artist. But that is not how or why art lingers. We continue to make and be seduced by art because its warp (form) and weft (content) can’t be taken one at a time and are more than the sum of their parts. There is in Neel that inseparable weave between the parts of experience defying language and their communication through utterly unrelated analogue actions like pencil lines, piled brac a brac, steel or, in Neel's case, oil on linen.