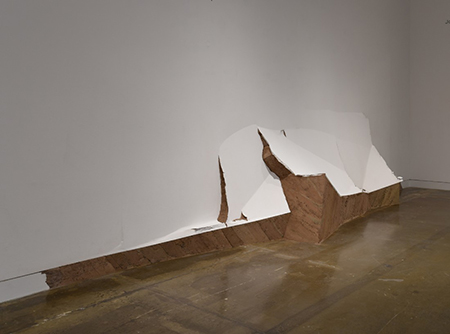 “Building As Ever: 2017 California Pacific Triennial” features 25 artists – ten from Los Angeles, and the rest from Hong Kong, Canada, Mexico, Colombia, El Salvador, Chile, Vietnam, Japan, Australia, China and South Korea. All respond to the notion of ‘permanence’ relative to the built environment and the artists’ particular cultural and personal connections to architecture. Renee Lotenero’s  "Stucco Vs. Stone" site specific installation, located outside the front door of the museum, is comprised of photographs, wood, metal and rubble. It depicts a group of buildings in severe decay or perhaps destroyed by earthquake. It points to the inevitability of debilitation of architectural structures over time, and the urgent challenge to maintain historical preservation projects by fighting the decaying process. Canadian artist Cedric Bomford’s two-story installation "The Embassy or Under a Flag of Convenience” is attached to the exterior of the museum. It provokes the question "Is this art or a building in the renovation process?.”

Columbian artist Leyla Cardenas’s "OCMA Stratigraphy" examines the underlying construction of the museum by peeling paint from the walls, using steel, dirt from under the museum and prehistoric marine deposits. Chinese artist Wang Wei’s "Slipping Mural," based on a mural at a zoo enclosure in Beijing, is a huge flat mosaic work comprised of hundreds of small tiles partially hanging from the wall and lying on the floor.

Lead Pencil Studio is a collaborative team of Seattle artists Annie Han and Daniel Mihalo who exhibit three large charcoal, graphite, ink and paint on paper works that reflect their interest in architectural space, the urban environment and influences on human behavior. Their series of 12 illuminated Ccrystals in steel cases and Plexiglas, "Void Promise: Last Track A, B,” represent images captured with a 3-D scanner of areas in Orange County undergoing rapid architectural transformations. These images are then applied to crystals using a laser-etching process.

Vietnamese artist Trong Gia Nguyen exhibits a series of mixed media works using oil pastel paintings on canvas mounted within inkjet prints. His works draw upon photographs of houses and loosely painted members of the families that inhabit them. Nguyen also presents a series of oil and acrylic wooden “gates” which mimic the iron gates of Vietnamese homes. These are suspended so as to expose their patterned forms as viewers see through them into his mixed media wall works.

These and other artists here interweave architecture and visual art in a manner that comments on the ephemeral nature of human beings and their dwellings. Buildings hold stories and memories, proof of our past, markers that we have lived, that we have touched and shaped the earth (Orange County Museum of Art [OCMA], Orange County).