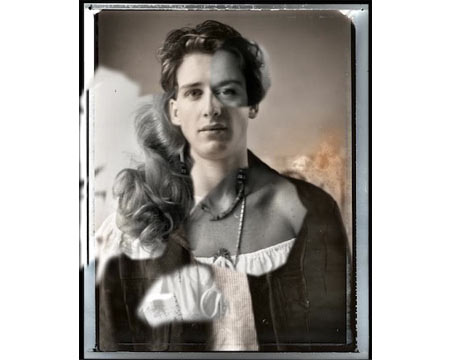 The director Gus Van Sant took Polaroids of actors in the course of his film work over the years. The original photographs functioned as casting references, an archive documenting headshots. For “Cut Ups” the artist scanned a collection of these into a digital format. These basic portraits were then transformed into layered, dreamy and sometimes disturbing collages.

The sharp intersections reflect a Cubist approach, but these portraits also owe something to Surrealism in their mysterious light-to-dark merging and in their off-register kilter. Some possess a glow and shadow similar to Man Ray's solarizations. But while the Surrealists made it happen in a darkroom, Van Sant has settled on the computer to achieve his special effects and overlay.

The case of hidden and shifting identity is clearly demonstrated in the group of “boy and girl” pieces, along with titles like 'woman and boy' and 'man and girl.' The overlaid images are constructed of both genders, and we’re not at all certain where one ends and the other begins. The sense of ambiguous transformation feels very au courant but also early 20th century, as if the artist is channeling the anima and animus of Carl Jung.

Ironic to the show's title “Cut Ups,” nothing was really cut, not in any sense of paper and scissors, these being digital collages. But by choosing his virtual cuts wisely and in some cases, minimally, Van Sant has made a point of maintaining a sense of the materiality of the original photographs. The word cut also refers to a term spoken by a director, the command charged to stop or freeze a process. That’s a wrap.