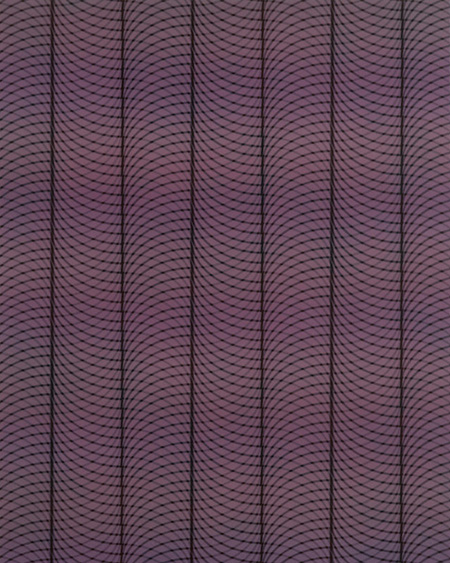 Seattle-born artist Cameron Martin, who has lived in New York since 1988, returns for a solo show of recent work as well as to guest-curate an accompanying group show, “Surfacing.” The latter features paintings, sculpture, works on paper and video by nine women artists, all of whom exhibit in New York City. The pairing gives us a good idea of one state of painting in Manhattan, art that is conceptually influenced and abstract. Intelligent, bracing and slightly enigmatic, Martin and the women offer encouraging signs about the health of abstract painting at a time when there is renewed pressure for figurative-social art that comments on our troubled times.

Martin, who attended Brown University in Providence, Rhode Island and Bush School in Seattle, was also a fellow in the prestigious Whitney Museum Independent Study program. Well connected, he has exhibited abroad in Austria, Japan, France, Switzerland, Norway, and Israel, as well as in solo and group shows in galleries and museums in Los Angeles, Buffalo and Dallas.

His new works — acrylic abstractions with strong geometric overtones — are different from the stylized mountain peaks we previously saw here. Instead of pushing toward landscape, as other critics have noted, Martin is deconstructing what a painting can do, hence the conceptual dimension. The five works in the front gallery are sparsely installed, all the better to give the intensely linear works plenty of breathing space. “Alerton” is closest to Op Art with its vertical columns and wavy purple background. “QT” employs black and white stripes in every imaginable position, but while it appears to be made of painted-and-collaged elements, it is comprised solely of acrylic paint.

An all-over, centerless composition is a post-Pollock New York hallmark, and “QT” fulfills this with overlapping sections, creating an ambiguous, shallow picture plane, as does “Alerton.” “Talland” is equally cerebral, with its alternating pale white and yellow horizontal bands and seemingly random, scratchy pencil scribble-marks which are, in fact, meticulously painted red and gray lines, confounding again what a painting can look like or how it can be made. Alluding to fabric patterns, “Double Partial” and “Amphor” otherwise differ considerably. The former places a big remnant of red and white patterned cloth against a grey background; in reality, the inner area is all painted on without any recourse to cloth or collage. “Amphor,” like “Alerton,” touches on illusionism with its wavy, condensed areas of blue and red that hover in tightened rows that leak black and white.

Five felt-tip marker drawings in the middle gallery extend inward the same ideas, blurring straight lines and staggering areas of color combinations. Tiny at 5 by 4 inches, one of the untitled works uses pale purple, another sticks to greens, while yet another to reds. More intellectual and intelligent than the earlier mountain peaks, Martin’s new work suggests how New York artists survived both Abstract Expressionism and Op art, but still pay debts to both movements.

“Surfacing” concentrates on surface treatments, among other things. The most obscure work and least visual, “Are: Still” by Jessica Dickinson harkens back to Duchamp with its random, dust-collecting strategy. From a distance it appears all white. Close up, one sees uneventful and unsatisfying smudges. More appealing, four carved-and-glazed stoneware sculptures by Pam Lins explore aspects of small-scale geometric art and embody the only type of ceramic sculpture New York currently favors: shelf-size, brightly colored and earthy-looking objets à la Ken Price, Ron Nagle and Kathy Butterly. Lins’ work is drier, with one side unglazed and the other colored with stripes or, as in “model,” a rainbow spectrum fan. Strong shapes also inform Austrian artist Ulrike Müller’s “Dokebi.” Its two triangles of black and yellow could be church steeples in Vienna. Closer to Martin, Xylor Jane’s “Swaggerdam” creates a big ‘X' of intersecting primary colors with green, purple and orange.

Monique Mouton displaces expectations of the conventional canvas rectangle in her flat, painted-plywood constructions, both “Untitled." In one, a dark red film sits over submerged colors on an irregular wooden pentagon. The other is more mysterious, with orange and white sections seeping through a brusque black cover. Mouton emphasizes irregularity, like Miranda Lichtenstein’s photograph, “You!,” which could be a fragment of a wall poster or crumpled protest sign. This is as close to politics as the exhibition approaches.

Amy Sillman, recently feted with a major show at Institute of Contemporary Art, Boston, contributes “Rome #11,” a pastel-and-gouache study of her signature outlined curvy shapes and blocks. It would be nice to see bigger examples from Sillman and the other artists, but nevertheless, the imports are a welcome sight.