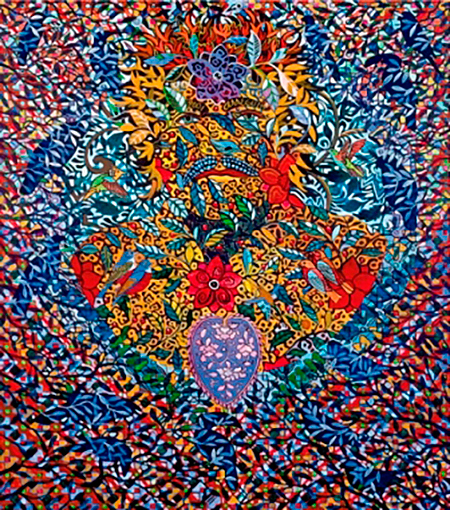 In a valiant effort to correct a long overdue curatorial debt, Whatcom Museum executive director Patricia Leach organized “Images of Resilience: Chicana/o Art and its Mexican Roots.” Overdue, because other curatorial priorities at the museum got in the way of addressing art by Hispanic-American artists. A debt, because Latino communities have become an ever more important segment of the museum’s cultural demographic in the past decade.

It turns out to be both timely and acutely sensitive to today’s immigration controversies. “Images of Resilience” stresses how welcome in the U.S. Mexican artists have been, and how their considerable presence in mid-20th-century America influenced and shaped American art as a whole.

Leach’s effort is valiant because she is attempting to tell so much about so many with so few examples and such limited space. Mexico 1900 to Bellingham, Washington 2017 is the rough chronological range, so historical examples are important. However, most are minor drawings, prints or photographs, as in the cases of Diego Rivera, José Guadalupe Posada, David Alfaro Siqueiros and José Clemente Orozco. Anchored by their dark, humanistic figuration and narrative flair, the rest of the artists take off in a blaze of color, anger and joyous ecstasy.

The show’s premise, “Chicana/o art,” usually implies a Southwest background, a Tex-Mex cultural movement associated with struggle and ethnic identity politics — as was the case in Mexico before and after the 1910 Revolution. Not all the “Images of Resilience” artists fall into that category, but a few who do, such as Alfredo Arreguín, Rupert Garcia, Ester Hernandez, Frank Romero and Cecilia Concepción Alvarez, all attended university art schools in the U.S. It is they who come closest to assimilating into the broader world of contemporary art; their ethnic particularity becomes their cultural password for entry.

Garcia and Arreguín have most successfully transitioned to the mainstream art world, blending historic or social subjects with modernist painting. Garcia’s “Looking for Chiapas” (1994) takes colors of the breakaway Mexican state’s rebel flag for its four Hans Hofmann-like corner squares. In between, a man falls backward, his body charred black from an explosion.

Arreguín, a Northwest resident and regional favorite from Michoacán, is the single best represented artist here with five paintings and a print. A veteran of several solo art museum exhibitions in Spain and Mexico as well as group shows at the Smithsonian National Portrait Gallery, Arreguín’s intricate brushwork and lace-like patterning reveal and conceal submerged historical figures like Frida Kahlo, Cesar Chavez and Emiliano Zapata. Instantly recognizable, one picture sets Kahlo looming above Rivera, as a boy, and a Posada female skeleton. “Good Harvest” (2006) memorializes Chavez. “Zapata’s Messenger” (2005) summons the revolutionary’s ghost into a blue-tiled room.

Difference within similarity is one way to describe contemporary Chicano art. All are figurative, narrative, influenced by Realism and Surrealism, and generally reflect the sensibility of “magic realist” novelists like Gabriel García Marquéz and Julio Cortázar. Enrique Chagoya is in this subset. Densely symbolic, he comes closest to Picasso with a Minotaur in a suit beneath a toreador’s cape in “Return of the Sacred Cow.” His “Powerful Hand” (both 1992) pairs Popeye’s Olive Oyl with a giant hand stigmata gushing blood. The bottom half of the four-by-eight foot diptych is a big pool of blood. Similarly, there’s a radioactive glow to the palm tree sunset, “Subdued like the Night” (1982) by Carlos Almaraz. Concepción Alvarez’s “In My Grandmother’s Garden” (2007) turns the old lady into a Hindu goddess with grandchildren as attendant deities. Her light grounds and bright color are the only canvases on view that really breathe.

Elsewhere, death is a constant, if comfortable, companion. Constructed by the Linares Family of Mexico City, the cheerful folk-art versions of girl skeletons bring the celebratory Day of the Dead indoors from the cemetery to the sleek art museum. Surrounded by the paintings, prints, sculptures, photographs and “altars” with more skulls and spurting blood, the Linares family figures seem calm and in control of the entire affair.