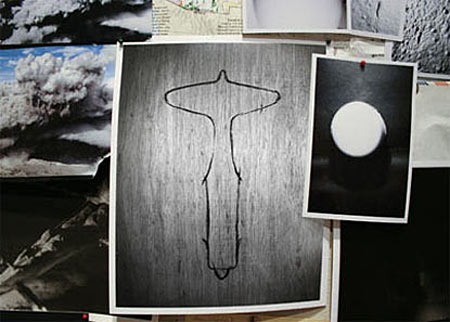 Dark, lyrical, mystifying, massive—each of these four new solo exhibitions has a distinct character. The abstract fields of color in the fourteen canvases of Mara de Luca’s “Stations” (2006-2007) make reference to the surfaces in Barnett Newman's “Stations of the Cross” (1958-64). But the target-like shapes and explosive forms that overlay the dark backgrounds suggest a theme more ominous than simply art historical references. In “Explosion, propaganda,” a violent red replaces the shadowy grays and browns present in the other canvases. Together, these images surrounding the viewer on all four walls evoke a sense of destruction and doom.

The theme in Lærke Lauta’s video installation “Floating Female” (2009-2010) is equally distressing, but the mood is lyrical, with allusions to a spiritual element. The woman in red, who is dancing in the first of five videos, is seen, on the four other screens, in nature, usually either in or beside water: Sometimes in the same red dress, at times in white feathered wings; sometimes hanging from a tree, at times floating face down; sometimes standing with a gentle wind blowing past her, other times attending her own funeral ceremony. The woman’s enigmatic nature instills a sense of expectant premonition in the surrounding landscape, as well as the artwork as a whole.

Lael Corbin’s makeshift laboratory is enigmatic as well, raising the question, “What’s going on?” Unlike Lauta’s work, there are no otherworldly references here. Rather, the wood, clay, metal and resin elements, the purring of the motors and fans, the half-constructed forms and the large bulletin board jammed with photographs of moon-like craters suggest a frame of scientific objectivity. The mystery is, what, exactly, is under investigation? The clues are few, obscure, and not cohesive, so any conclusion is dependent on the viewer’s experience and perception.

Ruben Ochoa’s enormous structures — “On the Brink of Turning” and “Building on the Fringes of Tomorrow” (both 2010) — present a concrete façade that appears solid, but, in fact, is just that, a façade. He achieves this dichotomy by applying concrete to a few select sides of a massive stack of shipping pallets. While many artists play with the line between a finished architectural structure and its unrevealed structural parts, such as the wood framing, or the electrical, plumbing or HVAC parts, Ochoa digs deeper. His use of the pallets references the delivery of these structural elements and the labor that goes into a building’s construction. Ochoa’s work is not without wit. The giant (10 to 16-foot), lumbering pallet-on-rebar-legs creatures in “watching, waiting, commiserating” (2010) reflect pure joy in the creative construction process.