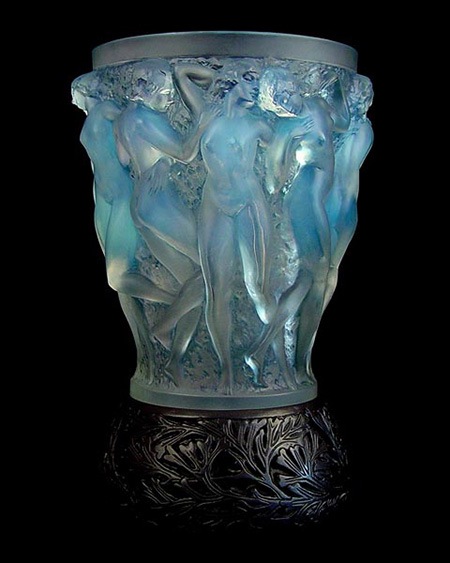 “Art Deco from the Huchthausen Collection” is part of an ongoing series of shows which fulfill the narrative connecting contemporary studio glass to its historic forerunners, for example, Czech modernist and Art Nouveau glass. Art Deco glass emerges out of the latter, both as an extension of and a reaction against it. The new style was already underway before the cataclysm of World War I, but coalesced internationally at a huge art and trade fair in Paris in 1925, the “International Exhibition of Modern Decorative and Industrial Arts,” soon known as Art Deco. This watershed event was repeated in subsequent years and had enormous influence on North American and European furniture, architecture, ceramics, metalwork and glass until World War II. In the US, it was eventually supplanted in the 1940s by Art Moderne, or Streamline Style.

Seattle glass artist David Huchthausen began collecting French Art Deco glass in 1973 while studying architecture in Chicago as an outgrowth of his interest in the Bauhaus. More colorful but allowing for ornament and decoration, the French pieces are still comparatively streamlined. With such a crowded installation in dozens of glass-topped display cases, this is an exhibition more for the specialist than the curious museumgoer. Dismayed at the vast expanse of objects on view, many will shy away. The case for Art Deco glass’ importance might have been better served with a more selective, austere installation.

The catalogue is comprehensive, with essays by scholars, curators and Huchthausen, who goes into extensive discussion of how many of the objects were acquired and when. One contributor calls Art Deco glass the “high point of French glass art” although one wonders whether these vases are greater than the achievements of Émile Gallé and other predecessors. All the big names except Maurice Marinot are here, including Muller Frères, Daum Frères, Verreries Schneider, René Lalique and Marius-Ernest Sabino. Firms and designers from the US, Sweden, Italy and Czechoslovakia are also represented.

Art Deco glass caught on because it reflected the times: rich and youthful, with a preference for simple forms that are combined with unusual, deep colors. The color sensibility grew out of the turn-of-the-century Fauve painting movement begun by Matisse. This took a turn with France's politically turbulent period during the 1930s depression era, following the affluent 1920s. As a consequence, some glass houses closed, mostly due to labor unrest and the general strikes of 1935 and 1936. Others stopped production altogether during World War II, while some morphed into smaller ventures revolving around individual artists, like André Thuret and Henri Navarre, followers of Marinot

Unlike postwar American studio glass, which was largely mouth-blown in free form or into molds, Art Deco glass was factory-based. Pieces could therefore be made in greater quantity, mostly through the invention of reusable steel molds by Lalique, probably the best known and most celebrated of the Art Deco masters. Acid-cutting into the surface was employed after each poured piece cooled to achieve the crisp, new low-relief look. Besides geometric motifs, other decorations included animals (panthers, butterflies, fish, parakeets, monkeys, etc.). There are male and female nudes, mermaids and bacchantes, those reveling female devotees of the Greek god Dionysius. Botanical specimens such as mistletoe, dahlias, plums, pine cones, poppies, and grape leaves are also plentiful. Tropical themes associated with overseas French colonies in North Africa and the Caribbean were popular as appropriate decorations in upscale homes. They also remind us that the wealthy, leisured consumers were eager to escape the dreadful realities of the 1930s.

The Muller brothers had worked for Émile Gallé, the godfather of Art Nouveau glass, but came to specialize in carved glass cameos when they opened their own shop in 1895. Similarly, the Schneider brothers, their vases well represented here, began at Gallé before going out on their own in 1913. The Daum family spanned several generations in Nancy, France, perilously near the German border in Alsace-Lorraine. Founder Jean Daum’s nephew, Paul, was keeping the company going when he was deported and murdered at Auschwitz in 1944. The Daum company survived and continues today.

A few relative loners continued before and after the war. Pierre D’Avesn, Jean Sala, André Delatte and André Hunebelle were predecessors of the American model: smaller studios, individual blowers and makers who also designed their own work. This was the future of international art glass: glass made in the studio instead of the factory.