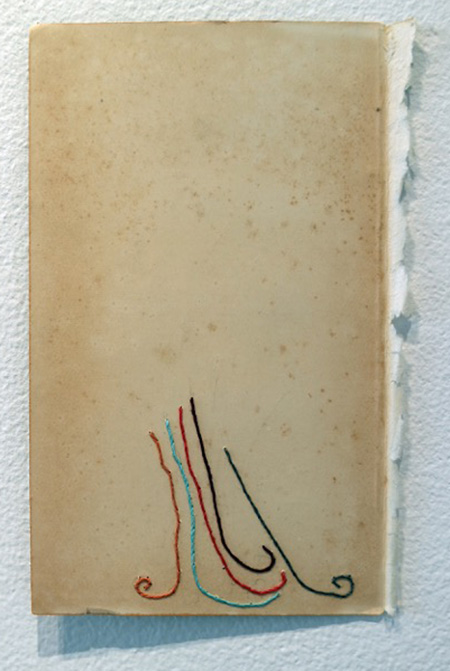 When we contemplate the role of the book in art, that is, not the glossy art book but the the book as media and subject in contemporary art, someone like Alan Corkery Hahn, who embroiders torn paperback book pages, does not automatically come to mind. But he should. However small in size his art may be, his talent and smarts are huge, covering an entire range of literary and intellectual issues — myth, chance, popular culture, cinema, science fiction, identity and the ownership of books — as well as demonstrating ceaselessly how the reverently or obsessively crafted object can radiate beyond its own constructed physicality.

Born in England in 1969 and educated in California at UC Davis and CSU Chico, Hahn proceeded to Seattle in 1998 to study fiber art at the University of Washington Graduate School. There, amid an experimental milieu now sadly over, he found his métier: sewing colored threads into dismantled paperback books. Inspecting the push-pinned pages on the gallery walls, an entire range of colors emerges as background. There are series within series to preoccupy our imaginations as we peel back Hahn’s serious and playful tropes: three Hollywood movie monsters in costume; three movie cowboys with horses and whips; three American science fiction authors immortalized in midnight-blue thread. Why? All have ties to the rise of the paperback book or “pulp” fiction. All, including Bella Lugosi, Boris Karloff and Lon Chaney, as well as Kurt Vonnegut, Theodore Sturgeon and Ray Bradbury, have transcended such lowly origins to achieve cultural icon status. Hahn is toying with notions of high and low culture, referencing consumer taste through its ready availability in the paperback book format. Invented by Penguin in the UK in 1935, paperbacks became entire personal libraries for many who never believed such ownership was possible.

Crossword puzzle books, invented by Simon and Schuster in 1924, as well as acrostics, pencil mazes and board games are alluded to as solitary pursuits. In “Convolutions,” “Roll and Move,” and “Dice” (all 2016), brain-twisters are allied to games of chance, all undercut by our gradual awareness of the laborious piercing, threading, sewing and knotting off of each page. “Maze” (2016) quietly but charmingly channels Mondrian complete with grid and tiny specks of red, blue and yellow threads. Even art history has reached us via the black paperback omni-history, Hahn is chiding us. Everything is available in paperback.

Paper’s origins in wood pulp are alluded to in “Bonsai 1” and “Bonsai 2” (2012) and “Drop 1” and “Drop 2” (2014). Potted bonsai, miniature trees, offer examples of controlling nature, perhaps the only hope for the future of paper, if there is to be one, something that has been practiced with re-seeding in the Pacific Northwest for nearly 100 years. Nevertheless, such exotic plants also emphasize the confinement and shorter life expectancy of a paperback book. The two “Drops” are Hahn at his most austere yet colorful phase. Echoing Robert Ryman, Hahn makes torn, unglued page edges rattle and glow. Five straight or curved threads adorn each “Drop,” leaving empty expanses above to be scribbled by the next “reader,” fortunately left blank by the former owner who left them for Hahn's interventions.

Much book art has been monumental, as in the work of Anselm Kiefer, Buzz Spector and the underknown Japanese artist, Takako Araki. Hahn distills scale and volume down to their essence, one page removed at a time. More akin to Joseph Cornell or Hanna Darboven, perhaps, than the big book artists, Hahn’s residual stitching is filtered through repetition and reverence, all the better to ascend toward a broader cultural or social meaning.