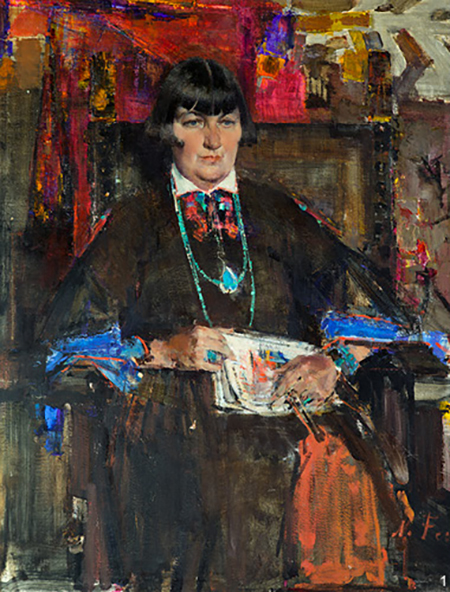 Cultural patronage is intended to be transformative both for the bestower and their circle, but there is typically an element of luxury and power that curdles genius into sloth. Mabel Ganson was the heiress to a prominent Buffalo, New York banking family who successfully transplanted the practice into a soil that proved surprisingly receptive to a modernism of the rugged individualist type. Retaining the names of her third and fourth husbands, Mabel Dodge Luhan became the single most transformative figure in Taos’ history. “Mabel Dodge Luhan and Company: American Moderns and the West” is an extensive gathering of personal documentation and ephemera paired with selections of art and artifacts produced by some of the artists she hosted and collected from the Native Americans among whom she lived. (Fourth and final husband Tony Luhan was himself a product of the Taos Pueblo.) We gain both a personal and contextual history of the person and the place. The influence of her youthful immersion in early modernist avant-garde culture reaches a crescendo midway through the exhibition, but her final decades flatline into a pleasant and uneventful conclusion.

Taking the model of the Paris salon of Gertrude and Leo Stein, whom she came to know during her years living near Florence, Italy (1905-12), Dodge (before Luhan) decided to try her hand at the patronage game upon her return to New York City. Her fingerprints were left on the famous 1913 Armory Show, but this modern young woman of means proved too restless and volatile in her romantic and emotional life to remain in one place until she settled in Taos in 1919 at age 40. If Stein had written of Oakland California that “there was no there there,” Taos was a virtual blank canvas that Dodge Luhan could fill in as she willed. By 1923 she had dismissed third husband Maurice Stern and married Luhan. The two remained conjugal for the rest of their lives. During the 1920s and 30s she drew a parade of intellectuals, mainly writers and artists, that included the historically familiar D.H. Lawrence, Marsden Hartley, John Marin, Ansel Adams, Agnes Pelton, Willa Cather, Aldous Huxley and of course Georgia O’Keeffe, who remained, if ultimately at the even more isolated distance of Abiquiu.

The Dodge Luhan that emerges here is an ambitious but not genuinely driven figure — at least not nearly so much creatively or intellectually as socially. Her reputation as conveyed here was more as a listener than a talker, more as a scout of exceptional talent than in the arena. Had she not been a person of means none of this would have ever happened. If her roots were metropolitan, her spirit gravitated to an open space where what she developed would be heeded by all — given that the scale of the pond was diminutive, her urban sensibility seems to have remained in place. That present day Taos is an unusually potent cultural destination owes more to Dodge Luhan than any other single individual (with the possible exception of the relatively aloof O’Keeffe), and this exhibition helps us to understand why.