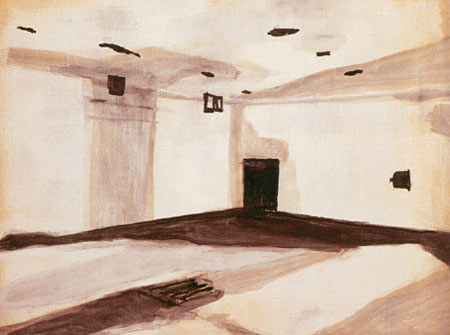 Though lauded in academic circles and by art-world insiders, especially in Europe, Luc Tuymans has yet to gain widespread acclaim in the States. Until now. This is the most comprehensive presentation of Tuymans’ work to date and the first U.S. retrospective for the Belgium-based Tuymans, 51, who is considered to be one of the most influential painters alive today. (There is even a brushwork style that bears his name: a horizontal stroke that lends a barrier-like feel, first seen in the early 1990s in such work as Der diagnostische Blick II.) The exhibition is comprised of 77 works dating from 1978 to the present.

Lest your expectations be misled, there are no fireworks here. These are not easy or charismatic works; they don’t care if you like them. They are serious, intense, and quiet.

As Madeline Grynsztejn, co-curator of the show with Helen Molesworth, readily points out, there is nothing nice or pretty about Tuymans’s paintings. She’s right. They’re often hazy and vague, painted with a muted palette. Tuymans is unsympathetic, exercising a journalistic objectiveness. The subject matter is typically horrific or gruesome; Tuymans is drawn to such daunting topics as the Holocaust, disease, murder, 9/11, and political corruption.

But the horror is never obvious. The images are often banal — a body part, a seemingly anonymous person or building, a leopard-skin rug, a decorative pattern. As intended, the work makes you question what you’re looking at and how you perceive what you see. What may seem like a common stovetop still life in “Peter” (1994) is actually taken from a forensic photograph of the home of a serial killer. “Der Architekt” (1997) shows a skier sitting, as if having just lightly fallen, on a slope. The details are vague with just enough form and contrast to relay the image; the almost monochromatic work glows icy blue. This uneventful moment is a still taken from a home movie of Albert Speer, architect of Hitler’s camps, offices, and monuments.

The back stories and subjects aren’t always so disturbing. There are literally paintings of bunnies and flowers. And the works aren’t always so unclear: “The Secretary of State” (2005) is a hard, closely cropped image of Condoleezza Rice. Tuymans paints what interests him, what is current. And at times those are visuals appropriated from the internet or other contemporary media. Another hallmark of his work is the way he frames and crops his images. Having explored filmmaking in the early-1980s, his approach often displays that influence to dramatic or narrative effect.

Not to be overlooked is Tuymans, the painter. The skill demonstrated is excellent. The sculpting brushwork in works such as “Seal” (2007) is sumptuous. The luminous, subtle color gradations that shift with the light in “K.Z.” and “Die blaue Eiche” (both 1998) are gently captivating. “Bend Over” (2001) shows a figure from behind, donning only underwear; it’s cropped at the knees so we see only the upper thighs and buttocks. The form is simple. The coloring is kept to various shades of green. And the composition almost completely fills the canvas. It’s tense, beautiful, sad — an exemplary work imbued with art historical reference, a la painting the nude.

The greatness of Tuymans’ art lies in his ability to make painting relevant to contemporary eyes. Working with the traditional genres of figure, landscape, and still life, he riles us, he wakes us up. He makes us stop, look, and think. And we’ll be glad we did. Indeed, perhaps the one thing missing from this exhibition is greater explanation. Though the work can stand on its own, the viewer gains much by knowing the stories behind the works (the weighty catalogue that accompanies the show fills in where the wall text falls short). This work isn’t for everyone (though for the serious art student, it’s a must). For those up for the challenge, however, you won’t be disappointed.