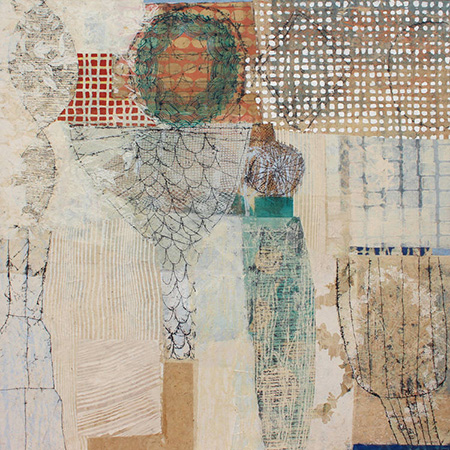 Eva Isaksen makes large collages out of previously painted works on paper that are mounted on canvas. They are not really paintings, but no longer prints, and recall the work of Seattle monotype artists of the 1980s and 1990s: Joan Stuart Ross, Lois Graham and Jacqueline Barnett. All share with Isaksen an aggressive, interventionist approach to the pictorial surface.

Instead of occluding space and creating color blocks like the older women did, Isaksen is all about layering, transparency and overlapping areas. Sans figures, the imagery is derived mostly from nature, interspersed with symmetrical dot patterns and lacy structures, all emerging from a primordial soup of concentric circles liberally peppered throughout.

Airy, yet with a flurry of linear activity igniting each work, Isaksen’s new work further complicates the picture plane. This contrasts with her earlier, dominant forms, adding more color, but giving up an emphasis on intersecting patterns that could recall cocoons, spider webs, and exploratory meandering lines. The nonrepresentational imagery (though “how nature influences my life” is how the artist sees it) opens up interpretive possibilities, but offers less to hang such a hat on. Overall compositions are dispersed to greater effect than before — every element is well placed — but this is easily achieved when nearly every canvas is a four-foot square. I miss the more adventurous scale of her show in 2013, much of which was featured in her retrospective the following year at North Dakota State University in Fargo.

Isaksen’s methods risk obscuring potentially deeper meaning; so much rests on unraveling process and craft. Underwater invertebrates, fish exoskeletons, Viking shields — all these alluded to her childhood in Norway and Germany, but seem to have receded by now in favor of more interchangeable and indistinguishably different sources. “Ice White” echoes Robert Motherwell’s earliest dripped-and-collaged canvases of the late 1940s. Vertical columns are isolated and bluntly contrast with big, blotchy black and blue spots. Isaksen has such a control over color, she is free to play it down (as here) or push it toward tempting limits, as in “White Fall” and “Tickle Pink.”

The other risk of an overdependence upon pattern is that such rattled repetition tends to conceal or obscure other identifiable image sources. When this occurs, as it does in “Mist,” “Black Hole” and “Night,” the aesthetic depth of abstract gives way to the decorative realm of textile design. When her use of pattern becomes overly dominant, individual areas of the picture are more compelling and satisfying than the whole. With such an evenhanded attack, a given work becomes less than the sum of its parts, however quietly dazzling to the eye those parts may be.