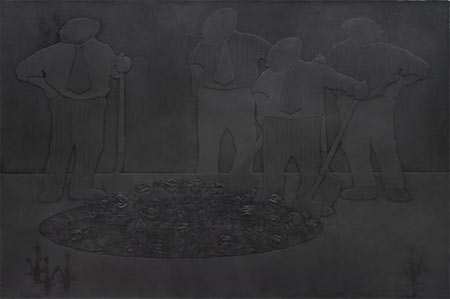 Slick on the surface — literally as well as figuratively — Tom Miller’s art is that of a skilled painter and draftsman.  His message is bitingly clear, delivered “through a glass, darkly.” Both pure painting and drawing, Miller’s 13 acrylic-on-paper or Masonite pieces, usually in black or white, imbricate mediums in such a way that his work suffers from the curse of looking almost too good to be true, as if there were some trick involved. There is: It resides in the sleight of hand known as intelligent craftsmanship. And, as with all magicians, a good deal of the audience’s enjoyment comes in paying close attention, hoping to catch a card up a sleeve, a wire in space, an extra bunny in the hat. Not finding any of those clues, our enjoyment intensifies to become wonder and delight.

These artworks appear to be ultra-smooth, even polished. The artist works acrylic, graphite and steel in a sculptural fashion, so that his images look as if they’ve been etched onto some out-of-this-world print medium. They are difficult to read, due to their all black- or whiteness, as well as to their beguiling and easily misread flatness. This flatness is highly yet subtly dimensional; there would be no work to speak of without that low relief, a modern version of Donatello’s schiacciato. Miller also uses the repetition of Minimalism to suggest social conformity and complacence, the results of our mainstream’s addictive habits of consumption, added to an unwillingness to speak out against the behaviors we know take place behind closed doors. So long as we can still shop cheap at Walmart’s, who’s got anything to complain about, right?

Miller’s subject matter is decidedly mordant. “Hiding the Body” references so much that is beyond, and lurking in the shadows behind, acceptable behavior in politics, on Madison Avenue, and in the military — just to give a few blatant examples of bastions of blandly reprehensible malevolence. These entities share a distressing willingness to deliberately commit Mafioso-like acts of betrayal, including and not limited to murder. Miller’s work has long featured pin-striped, balding men in neckties whose identities have been lost in the depths of their multiple transgressions. The artist states, “The characters in my paintings are real and fictional. . .in nefarious, humorous, absurd, pathetic, and questionable situations.” Hardly reverently represented, they labor at digging a hole filled with roses — or are they skulls? Heads of state occupy their chairs like syphilis-addled royalty, with empty chairs as stand-ins for all the invisible wheeling and dealing that is the stuff of politics, barely human, and certainly not humane.

A series of optical exercises, “New Panopticon” and “Impossible Ladder,” for example, are technically good but don’t have the soul of the rest of the exhibition. A portrait of a chandelier, “Untitled [chandelier],” not an official part of the exhibition, was a stand-out, and hints at a promising fresh direction. The piece dripped, Francis Bacon-style, with dread and beauty, as the object morphed from a twisted spinal chord to a light fixture shaking dewy droplets of light from itself, like a happy dog just coming out of the water.