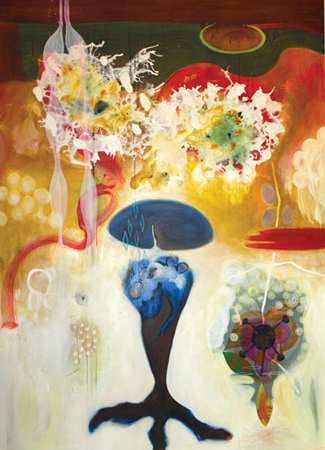 The list of figures who have shown at the van Straaten Gallery is an impressive one; owners Bill and Jan van Straaten have recruited famous artists from the ranks of those who have their prints pulled at Riverhouse Editions--a fine printmaking facility the couple also owns--while gallery director William Biety acts as the connection to the local artists. The subject of van Straaten's winter offering was one of Denver's most idiosyncratic painters, Homare Ikeda. Entitled "Voicers," his stunning exhibition was a major event, owing not only to the expected high quality of the works, but also because it was so large. Ikeda is notorious for spending years working on a single piece, so it goes without saying that he's hardly prolific. In light of this, it was surprising that the show included over two dozen pieces, with most of them done in the span of a single year, 2009.

Ikeda's distinctive abstract paintings are downright weird-looking. In works such as Mai, Head and Fish Eye, just three of the monumental paintings included, strange forms and odd shapes, evocative of primitive life-forms, have been densely arranged across the picture planes. These works--and all the others in the show--feature a strange kind of pictorial tension, with Ikeda placing the individual elements in unexpected juxtapositions to each other creating a dynamic sense of imbalance. This same out-of-kilter quality is seen in his painterly technique, where colors are smoothly blended in places, while in others they stand out as staccato bursts that rise up off the surfaces. The paintings are dark, with Ikeda having a taste for rich, deep tones. The sketches, on the other hand, are light, with the abstract depictions on both being their only connection.

Ikeda emerged in the top ranks of Colorado art out of the Neo-Expressionist scene of the 1980s. It was in this context that Ikeda found ready success; his work has been shown throughout the region and has been acquired by several significant collections, none more so that of the Denver Art Museum. It might be tempting to chalk up Ikeda's exotic painterly character to his upbringing since he was born and raised in Japan. However there’s a problem with this interpretation: his work is anything but Japanesque.